AC Ace was a car made by AC Cars of Thames Ditton, England.

AC came back to the market after the Second World War with the staid Two-litre range of cars in 1947, but it was with the Ace sports car of 1953 that the company really made its reputation in the post war years. Casting around for a replacement for the ageing Two litre, AC took up a design by John Tojeiro that used a light ladder type tubular frame, all independent transverse leaf spring suspension, and an open two seater alloy body that was made using English wheeling machines, possibly inspired by the Ferrari Barchetta of the day.

Early cars used AC's elderly two litre, overhead cam, 100 bhp (70 kW), straight six engine (first seen soon after the end of the First World War) which gave a top speed of 102 mph (164 km/h) and 0-60 mph (96 km/h) in 13 seconds. It was hardly a sporting engine, however, and it was felt that something more modern and powerful was required to put the modern chassis to good use. Thus, from 1956, there was the option of Bristol Cars' two litre 120 bhp (89 kW) straight six engine with 3 downdraught carburettors and slick four speed gearbox. Top speed leapt to 116 mph (186 km/h) with 0-60 (96 km/h) in the nine second bracket, and response was much sweeter and modern. This was replaced in 1962 with the 2.6 litre Ken Rudd 'Ruddspeed' engine, adapted from that used in the Ford Zephyr. It used 3 Weber or SU carburettors and either a 'Mays' or iron cast head. This set up boosted the car's performance further, but it was not long before Carroll Shelby drew AC's attention to the Cobra, so only 37 were made.

In the final years of production, some Ace models were fitted with the MKII Ford Zephyr 2.6 litre straight-6 engine. These Ford engined models had a smaller grille which was carried over to the Cobra.

Overdrive was available from 1956 and front disc brakes were an option from 1957, although they were later standardised. With the engine set well back in the chassis, the Ace handled well and was successful in competition.

Joining the Ace in 1954 was the Aceca hard top coupé, which had an early form of hatchback rear door but used the same basic timber framed alloy body.

When Bristol ceased building their 6-cylinder engine in 1961, AC's owner, Charles Hurlock, was approached by Carroll Shelby to use a Ford V8 in the Ace chassis, producing the AC Cobra in 1962. Production of the Ace ended the same year. The AC Cobra came in small block and later big block configurations. It was Ford's big block 427 "side-oiler" that led to the car winning the GT class at Le Mans in June 1964.[citation needed] At the time, the AC Cobra 427 was the fastest "production" car in the world. 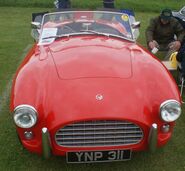 Hawk Ace
Add a photo to this gallery

AC Ace Bristol
Add a photo to this gallery
Retrieved from "https://classiccars.fandom.com/wiki/AC_Ace?oldid=50470"
Community content is available under CC-BY-SA unless otherwise noted.