Start a Wiki
The Alfa Romeo 2000 (series 102) is a car produced by the Italian automobile manufacturing company Alfa Romeo as a successor to the 1900.

The four-door Berlina was manufactured by Alfa Romeo itself, while the two others were designed and manufactured by the design companies Touring (Spider) and Bertone (Sprint). 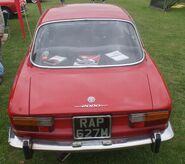 Alfa Romeo 2000 GTV SE
Add a photo to this gallery
Retrieved from "https://classiccars.fandom.com/wiki/Alfa_Romeo_2000?oldid=55750"
Community content is available under CC-BY-SA unless otherwise noted.