Start a Wiki
The Alfa Romeo Spider (105/115 series) is a roadster produced by the Italian manufacturer Alfa Romeo from 1966 to 1993 (190 Spiders were badged as 1994 Commemorative Editions for the North American market). Widely regarded as a design classic, it remained in production for almost three decades with only minor aesthetic and mechanical changes. The three first series were assembled by Pininfarina in Grugliasco and the fourth series in San Giorgio Canavese. The last Spider was produced in April 1993, it was also the last rear wheel drive Alfa Romeo produced before Alfa Romeo 8C Competizione was introduced.

The first presentation of the car, as a prototype, was at the Turin Motor Show in 1961.[4] However, the continuing success of existing models and the economic challenges facing Italy at the time meant that the first pre-launch production Spiders began to emerge from the Pininfarina production line only at the end of 1965.

Based on the Giulia 105 series chassis, the Spider was launched in the 36th Geneva Motor Show in March 1966. Unnamed at launch, the name "Duetto" was chosen in a write-in competition in Italy. The Italian firm of Pininfarina was responsible for the design of the body; in fact, the Duetto was the last project with which founder Battista "Pinin" Farina was personally associated.

Pininfarina were also responsible for the manufacture of the vehicle's monocoque construction (designed with the relatively new principles of crumple zones incorporated into the front and rear). The engine was a 1570 cc variant of the Alfa Romeo twin cam four cylinder engine, and produced 109 hp (81 kW). Sparsely fitted inside but including five speed manual transmission, disc brakes and independent front suspension, the price on launch in Italy was 2,195,000 lire and upon its US introduction in 1967, price was US$3,950 which was about $1,500 more than an MGB.

The original "Duetto" was in production from 1966–1967; replaced in late 1967 by the 1750 Spider Veloce, powered by a 118 hp (88 kW) 1779 cc engine. In Europe this was fitted with two twin carburettors, whereas models for the North American market (from MY 1969) had SPICA (Società Pompe Iniezione Cassani & Affini) mechanical fuel injection. Modifications were also made to the suspension, brakes, electrics and wheels and tires though the car looked effectively the same. Visible differences were limited to the rear-view mirror repositioned to the door, and different badging on the tail. During the production run, the front repeater lights were moved ahead of the wheelarches. The car's official title was 1750 Spider Veloce, the name "Duetto" being dropped from this point on.

A new Spider 1300 Junior, with a 1290 cc engine producing 89 hp (66 kW), was introduced in 1968. This lacked various features of the 1750, including the plastic headlamp fairings, the brake servo, hubcaps and opening quarterlight. Due to its round (or long) tail, the Series 1 Spider is sometimes known by the nickname of "Osso di Seppia" - Italian for "cuttlefish bone". This particular car was the model featured in the 1967 movie The Graduate, driven by Ben, the character played by Dustin Hoffman.

In 1970 the first significant change to the exterior styling was introduced on the 1750 Spider Veloce, with the original's distinctive elongated round tail changed to a more conventional cut-off tail, called the "Kamm tail", as well as improving the luggage space. Numerous other small changes took place both inside and out, such as a slightly different grille, new doorhandles, a more raked windscreen, top-hinged pedals and improved interior trim.

1974 saw the introduction of the rare, factory request, Spider-Targa. Based upon the Spider, it featured a Porsche style solid rear window and lift out roof panels, all made out of black GRP type material. Less than 2,000 models of such type were ever made and was the only part solid roof Spider until the introduction of the factory crafted hard top.

The 1300 and 2000 cars were modified in 1974 and 1975 respectively to include two small seats behind the front seats, becoming a "two plus two" four seater. The 1300 model was discontinued in 1977. Also, between 1974 and 1976, the early-style stainless-steel bumpers were discontinued and replaced with black, rubber-clad units to meet increasingly stringent North American crash requirements.

The Series 3 Spider was previewed in North America for the 1982 model year with the introduction of 2.0 liter Bosch electronic fuel injection to replace the SPICA mechanical injection.

The Spider underwent a major styling revamp in 1983, which saw the introduction of black rubber front and rear bumpers. The front bumper incorporated the grille and a small soft rubber spoiler was added to the trunk lid. The change altered the exterior appearance of the car considerably and was not universally praised by enthusiasts. Various other minor mechanical and aesthetic modifications were also made, and the 1600 car (never available in North America) dropped the "Junior" name.

The interior was revised with a new center console, lower dash panels (to meet U.S. regulations) and a single monopod gauge cluster (with electronic gauges). For the North American market a model dubbed the Graduate was added in tribute to the car's famous appearance in the 1967 film, The Graduate, starring Dustin Hoffman. The Graduate was intended as a less expensive "entry-level" Alfa. While it had the same engine and transmission as the Quadrifoglio and Veloce, it lacked the alloy wheels and luxury features of the other two models. The Graduate model had manual windows, basic vinyl seats, a vinyl top, and steel wheels as standard. Air conditioning and a dealer-installed radio were the only options. It first appeared in 1985 in North America and continued until 1990.

Minor changes occurred from 1986–89, including new paint colors, a center high mount stop lamp (CHMSL) midway through 1986 for North American models, a move away from the fade-prone brown carpet and new turn signal levers. Some 1988 models featured automatic seatbelts that extended from a large device between the front seats. 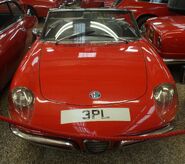 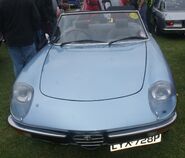 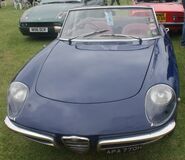 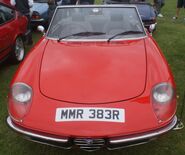 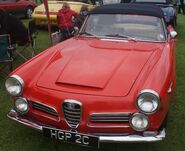 Alfa Romeo Spider
Add a photo to this gallery
Retrieved from "https://classiccars.fandom.com/wiki/Alfa_Romeo_Spider?oldid=63247"
Community content is available under CC-BY-SA unless otherwise noted.