Start a Wiki
The Alvis TA 14 was the first car to be produced by Alvis cars after World War II. It was made from 1946 until 1950 when it was replaced by the Alvis TA 21.

The car was available as a four-door saloon by Mulliners of Birmingham but there were also Tickford and Carbodies drophead versions, all front doors being "Suicide Doors" . The bodies were mounted on an updated pre-war Alvis 12/70 chassis that was widened and lengthened but retained the non-independent leaf spring suspension and mechanically operated brakes. Disc wheels replaced the 12/70s wires. 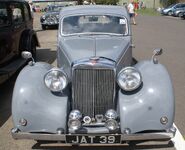 Alvis Duncan TA14
Add a photo to this gallery

Retrieved from "https://classiccars.fandom.com/wiki/Alvis_TA_14?oldid=68878"
Community content is available under CC-BY-SA unless otherwise noted.