The Alvis TA 21, sometimes called the 3-Litre, is an automobile which was produced by Alvis Cars between 1950 and 1953. It was the first all new Alvis to be produced after World War II.

The car was available in four-door Saloon and Tickford drophead versions. 302 dropheads were made. The centre section of the body was carried over from the earlier TA 14 with minor changes but the engine and luggage compartments were new and accounted for the extra length.

The front doors "Suicide doors" remained rear hinged . Separate seats were fitted at the front and in the rear was a bench seat with fold down centre armrest. Leather trim was used. The saloon bodies were made for Alvis by Mulliners in Birmingham.

The 2993 cc engine was new and produced 83 bhp (62 kW) fitted with a single Solex carburettor and applying a compression ratio of 7.0:1. Unusually, the engine incorporated timing gears at the rear of the cylinder block and a 7-bearing crank to increase smoothness. This was the first appearance of the engine that would power Alvis cars until the manufacturer retreated from passenger car production in 1967, although modifications including increased compression ratios as higher octane fuels became available would enable the power output to be progressively raised after 1953 until, fed by three SU carburetters, it reached 150 bhp (110 kW) in 1965.

Suspension was independent at the front using coil springs with leaf springs at the rear. 11 in (279 mm) drum brakes using a Lockheed system were used, the first use of hydraulic operation by Alvis. 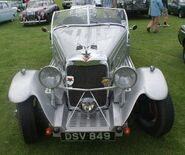 Alvis Sports based on an Alvis TA 21 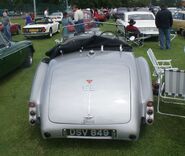 Alvis Sports based on an Alvis TA 21
Add a photo to this gallery
Retrieved from "https://classiccars.fandom.com/wiki/Alvis_TA_21?oldid=68875"
Community content is available under CC-BY-SA unless otherwise noted.