The car was available in four-door saloon and drophead versions. The bodies style was essentially the same as the TA 21, including the front "Suicide doors", one of the differences was the fitting of chrome-plated window surround on the doors. The saloon bodies were made for Alvis by Mulliners in Birmingham and the dropheads by Tickford.

The 2993 cc engine was upgraded to produce 100 bhp (75 kW) by modifying the cylinder head and fitting twin SU carburettors. Suspension was the same as the TA 21, independent at the front using coil springs with leaf springs at the rear. The 11 in (279 mm) drum brakes using a Lockheed system were also retained.

The TC21/100 or Grey Lady was a further upgrade with wire wheels and engine compression ratio raised from 7:1 to 8:1. The final drive ratio was also raised from 4.09:1 to 3.77:1. Front fog lamps were also a standard fitting and the bonnet gained air scoops. A heater was fitted as standard but the radio was an option. 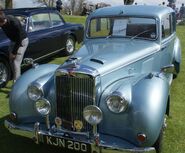 155 Alvis TC 21
Add a photo to this gallery
Retrieved from "https://classiccars.fandom.com/wiki/Alvis_TC_21?oldid=68877"
Community content is available under CC-BY-SA unless otherwise noted.