Start a Wiki
The Alvis TE21, also known as the Series III, is an automobile produced by English manufacturer Alvis between 1963 and 1966. It was an updated version of the 1958 TD21.

The body was a modified version of the TC108G styled by Graber of Switzerland and built by Park Ward and distinguished by having twin headlights mounted one above the other. Saloon and drophead versions were available. The design was noted for its lack of bright side trim or creases moulded into the body parts. The windshield was one-piece, curved, and not too highly sloped.

The 2993 cc engine, first used in the 1950 TA21, received a modified cylinder head and manifold which increased power to 130 bhp (97 kW) at 4000 rpm giving the car a top speed of 107 mph (172 km/h). A choice of automatic or five speed gearbox made by ZF was available. Suspension was independent at the front using coil springs, with leaf springs at the rear. Disc brakes were fitted to all wheels. 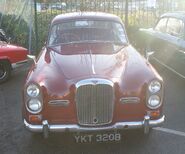 Retrieved from "https://classiccars.fandom.com/wiki/Alvis_TE_21?oldid=44379"
Community content is available under CC-BY-SA unless otherwise noted.