It was Ashley's attempt at a Grand Tourismo car. It was very pretty for it's day (and still is), it takes most of its styling cues from its sister the 1172.

Later Sportivas used the Ashley MkIV chassis. In both cases the power came from the 1172cc Ford side valve engine, although other engines could and were used.

The Sportiva was also available in convertible form, although they are very rare. The pretty bodywork was made using GRP.

Production was short lived but some panels were available for a time after production ceased.

There are still quiet a number of these Ashley Sportiva's existing and registered for road use, the stories of some of these can be found at this website.

The following video shows a Sportiva being driven out to a family picnic:

This file was uploaded by the photographer or author. 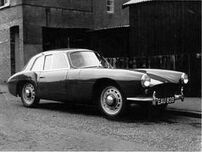 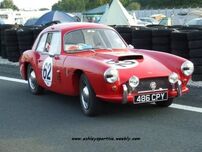 1961 Ashley Sportiva Coupe Mk I
Add a photo to this gallery
Retrieved from "https://classiccars.fandom.com/wiki/Ashley_Sportiva?oldid=69754"
Community content is available under CC-BY-SA unless otherwise noted.