The two initials stand for David Brown, Aston Martin's chief between 1947 and 1972. It is meant to be a marked improvement over the previous DB4 with a new 5 speed manual transmission, a larger 4.0L engine and three SU carburettors.

The DB5 is best known for it's appearance in the James Bond movie entitled 'Goldfinger'. Since then, it has stayed in the subconscious of popular culture due to its striking and lasting nature.

Just 123 convertible DB5s were produced, though they never used the typical "Volante" name. The convertible model was offered from 1963 through to 1965. Originally only 19 of the 123 DB5 Convertibles made were left-hand drive. From October 1965 to October 1966, Aston Martin used the last 37 of the Aston Martin DB5 chassis' to make another convertible model. These 37 cars were known as "Short Chassis" Volantes and were the first Aston Martins to hold the "Volante" name. Although calling it a "Short Chassis" is a bit of a misnomer as the "short" comes from comparing it to the subsequent DB6, which has a longer chassis. When compared to the DB5, it is not "short" but rather the same size, however these cars differ to the DB5 convertible models as they feature DB6 split front and rear bumpers and rear TR4 lights, as also used on the DB6.

A prototype DB5 shooting brake was custom produced by the factory for David Brown, an avid hunter and dog owner, and 11-12 more coupés were custom modified for Aston Martin by independent coachbuilder, Harold Radford. The taillights used were Triumph units, and were also adopted for the succeeding DB6.

The Aston Martin DB5 is one of the most famous cars in the world thanks to Oscar winning special effects genius (also known as 'the Real Q') John Stears who created the deadly DB5 for use by James Bond in Goldfinger (1964). Although Ian Fleming had placed Bond in a DB Mark III in the novel, the DB5 was the company's newest model when the film was being made. The car used in the film was the original DB5 prototype, with another standard car used for stunts. Two more modified cars were built for publicity tours after the film's release. In January 2006, one of those cars was auctioned in Arizona for $4.6 million. The same car was originally bought in 1970 for from the owner, Sir Anthony Bamford, by a Tennessee museum owner. The other car is located in the Netherlands in the Louwman Museum, and this car was mainly used for promoting the movie.

Within the universe of James Bond, the same car was used again in the following film, Thunderball (registration BMT 216A), a year later. A different Aston Martin DB5 (registration BMT 214A) was used in the 1995 Bond film, GoldenEye in which three different DB5s were used for filming. The BMT 214A also returned in Tomorrow Never Dies (1997), and was set to make a cameo at Castle Thane in The World Is Not Enough (1999), but the scene was cut. Yet another DB5 appeared in Casino Royale (2006), this one with the steering wheel on the left side versus the previous British versions. It also appears in his most recent movie Skyfall (2012) equipped with the same browning mchine guns and righthand drive as in the earlier versions.

The first DB5 prototype used in Goldfinger with the chassis number DP/216/1 was later stripped of its weaponry and gadgetry by Aston Martin and then resold. It was then retrofitted by subsequent owners with nonoriginal weaponry. The Chassis DP/216/1 DB5 was stolen in 1997 from its last owner in Florida and is currently still missing.

In January 2011 a 1/8 scale model was released by part work magazine publisher GE Fabbri in the UK. Over 85 weekly parts, the model builds into one of the biggest 007 scale models to date, with working gadgets and lights.

On 1 June 2010, RM Auctions announced the upcoming auction of a DB5 used in Thunderball and Goldfinger. The owner – Jerry Lee, President/Owner of WBEB Radio in Philadelphia, PA- originally bought the car from the Aston Martin company for in 1969. At the auction, this famous DB5 was eventually sold for 2,600,000 GBP ( US). 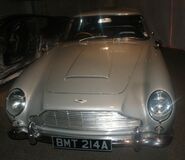 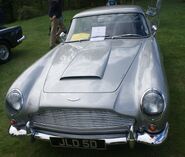 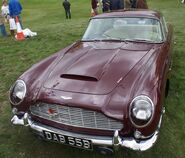 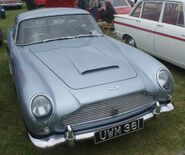 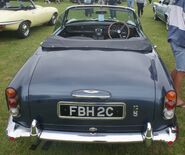 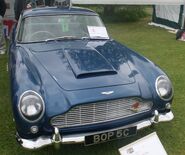 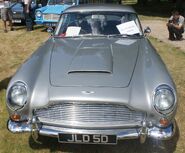 Aston Martin DB5
Add a photo to this gallery
Retrieved from "https://classiccars.fandom.com/wiki/Aston_Martin_DB5?oldid=63179"
Community content is available under CC-BY-SA unless otherwise noted.