Start a Wiki
The Austin-Healey Sprite is a small open sports car which was announced to the press in Monte Carlo by the British Motor Corporation (BMC) on 20 May 1958, just before that year's Monaco Grand Prix. It was intended to be a low-cost model that "a chap could keep in his bike shed", yet be the successor to the sporting versions of the pre-war Austin Seven. The Sprite was designed by the Donald Healey Motor Company, which received a royalty payment from the manufacturers BMC. It first went on sale at a price of £669, using a mildly tuned version of the Austin A-Series engine and as many other components from existing cars as possible to keep costs down.

The Sprite was made at the MG sports car factory at Abingdon and it was inevitable that the success of the design would spawn an MG version known as the Midget, reviving a popular pre-war model name. Enthusiasts often now refer to Sprites and MG Midgets collectively as "Spridgets".

The little Sprite quickly became affectionately known as the "Frogeye" in the UK and the "Bugeye" in the US, because its headlights were prominently mounted on top of the bonnet, inboard of the front wings. The car's designers had intended that the headlights could be retracted, with the lenses facing skyward when not in use; a similar arrangement was used many years later on the Porsche 928. But cost-cutting by BMC led to the flip-up mechanism being deleted, therefore the headlights were simply fixed in a permanently upright position, giving the car its most distinctive feature.

The front sheet-metal assembly, including the bonnet(hood) and wings, was a one-piece unit, hinged from the back, that swung up to allow access to the engine compartment. The 43 bhp, 948 cc OHV engine (coded 9CC) was derived from the Austin A35 & Morris Minor 1000 models, also BMC products, but upgraded with twin 1 1/8" inch SU carburettors. The rack and pinion steering and suspension were derived from the Morris Minor 1000. The front suspension was a coil spring and wishbone arrangement, with the arm of the Armstrong lever shock absorber serving as the top suspension link. The rear axle was both located and sprung by quarter-elliptic leaf springs, again with lever-arm shock absorbers. There were no exterior door handles; the driver and passenger were required to reach inside to open the door. There was also no boot lid, and access to the spare wheel and luggage compartment was achieved by tilting the seat-backs forward and reaching under the rear deck, a process likened to potholing by many owners.

The Sprite's chassis design was the world's first volume-production sports car to use integrated construction, where the sheet metal body panels (apart from the bonnet) take many of the structural stresses. The two front 'chassis' legs which project forward from the passenger compartment, however, stop the shell being a full monocoque. The design is said to have been influenced by the Jaguar D-type.

The Mark II used the same 948 cc engine (engine code 9CG) but with larger twin 1 1/4 inch SU carburettors increasing power to 46.5 bhp and a close-ratio gearbox. The bodywork was completely revamped, with the headlights migrating to a more conventional position in the wings, either side of a full-width grille. At the rear, styling borrowed from the soon-to-be-announced MGB gave a similarly more modern look, with the added advantages of an opening boot lid and conventional rear bumper bar. The result was a much less eccentric-looking sports car, though at the expense of some 100 lbs extra weight. In contrast to the 'frogeye', the later cars are often collectively referred to as 'square-bodied' Sprites by enthusiasts.

An MG version of the car was introduced in May 1961 as, 'the new Midget,' reviving a model name which had been a great success for the MG Car Company in the 1930s. The Midget was to prove more popular with the public than the Sprite and by 1972 had completely supplanted it within the BMC range. In October 1962 both Sprites and Midgets were given a long-stroke 1098 cc engine (engine code 10CG), which was also fitted in single carburettor form to the Austin A40 and Morris Minor 1000 (which nevertheless remained the Minor 1000). A strengthened gearbox with Porsche (baulk-ring) synchromesh was introduced to cope with the extra power - a heady 56 bhp. Front disc brakes were also introduced at the same time and wire wheels became an option.

Innocenti also produced their own version of the Sprite, using the standard production underframe (initially shipped out from England), but clothed in the sharpest of Italian suits, styled by the American Tom Tjaarda, then working at Carrozzeria Ghia. The Innocenti 950 Spider and later 1100 Spider were produced from 1961 until 1968.

The Mark III Sprite was also marketed as the Mark II MG Midget – differences between the two were again restricted to minor trim detailing. Although still 1098cc, the engine had a stronger block casting, and the size of the crankshaft main bearings was increased to two inches (engine code 10CC).

A new (slightly) curved-glass windscreen was introduced with hinged quarterlights and wind-up side windows. Exterior door handles were provided for the first time, with separate door locks. Though the car could now be secured, with a soft-top roof the added protection was limited. The rear suspension was modified from quarter-elliptic to semi-elliptic leaf springs, which gave a more comfortable ride for a near-negligible weight penalty. Though scarcely sybaritic, these changes helped the Sprite and Midget compete with the recently released Triumph Spitfire.

It has been suggested here that there was a "short run of vehicles (unknown number) in late 1963 with the Mk II body/interior but with the Mk III undercarriage/suspension modifications". Although no source is given for this assertion, the basis may be more than speculation. There are numerous recorded instances throughout Sprite and Midget production where specification changes do not precisely concur with model changes. At the very least, the prototypes for the half-elliptic models are likely to have been taken from the production line and some of these may well have been subsequently sold. However, the number of such cars would have been small.

(At least one such was exported to Italy, where it was still running until wrecked in 1971. It had the full MK III undercarriage and instrument cluster and front disc brakes, but Mk II coachwork.)

The next upgrade was presented at the London Motor Show in October 1966. Besides receiving the larger 1275 cc engine (which disappointed enthusiasts by being in a lower state of tune than that of the Mini-Cooper 'S'), the Mark IV and its cousin the Mark III MG Midget had several changes which were more than cosmetic. Most notable is the change from a removable convertible top, which had to be stowed in the boot, to a permanently affixed, folding top of greatly improved design, which was much easier to use. Separate brake and clutch master cylinders were fitted, as car manufacturers' thoughts began to turn to making their products safer. On US market versions the larger engine sacrificed some of its performance from 1968 on, through the use of smog pumps and other modifications to comply with federal emission control requirements. 1969 was the final year the Sprite was exported to the US.

Cutting costs, BL declined to renew its association with Donald Healey, so the final 1,022 Sprites built in 1971 were simply "Austin Sprites." There was no direct successor, as BL's extensive range already contained the MG Midget, which was identical to the Sprite except for badging, and the similarly dimensioned and priced Triumph Spitfire.

Sprites were imported into Australia in completely knocked down (CKD) kit form and assembled by the Pressed Metal Corporation at Enfield, in New South Wales.

Models assembled in Australia included the Mk 1, 2, 2A, 3 and 3A, as can be seen in this Austin Healey Sprite Display Day picture in Melbourne, Victoria.

Ashley Laminates Ltd was a British manufacturer of body shells and chassis for specials from 1955 to 1962, they also offered a range of products, bonnets and hardtops for mass-produced sports cars, including the Austin-Healey Sprite, MG Midget, Triumph Spitfire, Jaguar E-Type and many others.

Adverts from 1963 onwards indicate that the company changed names to Ashley Auto Improvements and moved to Bishops Stortford in Hertfordshire.

Production of these conversion products continued into the mid 1970's before the company closure in 1972.

The Ashley Laminates range of bodyparts has been re introduced in 2010 by AshleyGT in Sutton, Surrey.

And whilst at present it focuses mainly on the Austin Healey Sprite and MG Midget there are moulds in progress for the Triumph Spitfire Mk1, 2 and 3.

The Lenham Motor Company of Kent, founded in 1960, was, and still is one of the once many "cottage industry" automotive companies providing specialist conversions based upon commercial brand platforms.

Best known for its Spridget coupé conversions and the Austin-Healey based Lenham Healey, the firm also produced hard-tops for Jaguar E-types, Triumphs, the Jensen-Healey, the Lotus Elan, and for the MGB.

At the 1960 Turin Auto Show, BMC's Italian partner Innocenti showed an attractive little Spider built upon Sprite underpinnings. The car was the first design of Tom Tjaarda's, drawn for Carrozzeria Ghia. Ghia's partner firm OSI built the bodyshells, when the car entered production in early 1961. The original Innocenti 950 Spider had the Frogeye's 948 cc engine with 43 hp (32 kW), 624 of these were built. Later in 1961 an uprated 46.5 hp (35 kW) was installed. In February 1963 the 1098 cc "S" model was introduced, this also had front disc brakes to cope with the extra power. The 1100 has 58 hp (43 kW) and could also be fitted with a removable hardtop. The Spider wasn't a mere reshelling, as the entire bulkhead was moved forward to provide longer doors and a more modern look. Unlike the spartan Frogeye, the Spider also had wind-up windows and a permanent windscreen.

The Innocenti Spider originally sold well in Italy, with production running at 13 cars per day in 1962, but it had a hard time competing against the cheaper Sprite in export markets. As more modern competitors arrived and as the British-built Sprite was modernized, sales dropped precipitously, with only 63 cars built in 1965. Thus, Innocenti presented the reworked Innocenti Coupé in September 1966, still with the same 1100 engine as seen in late Spiders. The badging on the car simply read "Innocenti C". The Coupé's all-new bodywork was wider and longer than the Spider's, and the wheelbase was extended by 150 mm to 2,180 mm (85.8 in). The floorpan was reworked to allow for the seats to be mounted lower than in a Sprite, making the cabin less cramped. It was competitively priced in the Italian market, slotting nicely between the smaller Fiat 850 Coupé and the bigger Fiat 124 Sport Spider. Only 794 were built when production ended in 1968. 4,790 of the 950 Spiders were built, and 2,074 of the 1100 cc Spiders. 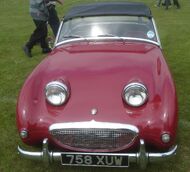 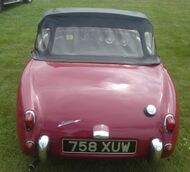 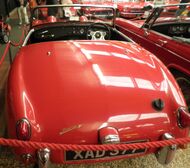 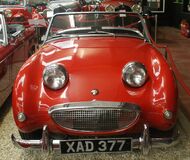 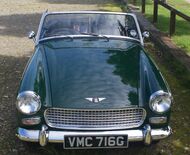 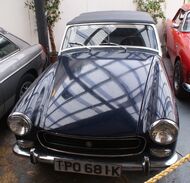 AshleyGT Sprite 2010
Add a photo to this gallery
Retrieved from "https://classiccars.fandom.com/wiki/Austin-Healey_Sprite?oldid=71461"
Community content is available under CC-BY-SA unless otherwise noted.