The car was introduced as a medium saloon in 1927 sitting above the 7 and 12 hp (9 kW) models but smaller than the 3.5 Litre 20. The six-cylinder engine was new but had similarities to the one fitted to the 20 with timing chain at the rear of the block. The car was up to date with the gearbox mounted in-unit with the engine and semi elliptic springs all round for the suspension. Safety glass was fitted from 1929.

In 1934 the gearbox gained synchromesh on 3rd and 4th gears and a larger-engined (2511 cc) Austin 18 model was added. An early automatic gearbox was available between 1934 and 1936 but few sold. 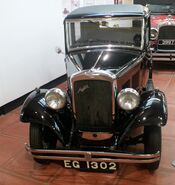 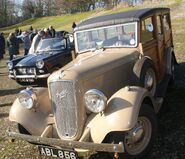 Austin 16/6 Shooting Brake
Add a photo to this gallery
Retrieved from "https://classiccars.fandom.com/wiki/Austin_16?oldid=59270"
Community content is available under CC-BY-SA unless otherwise noted.