Start a Wiki
The A35 was a small (compact) car sold by the British Motor Corporation under the Austin marque in the 1950s.

The A35 was very similar in appearance to the A30, except for a larger rear window aperture and a painted front grille, with chrome horse-shoe surround, instead of the chrome grille featured on the A30. Both had 13 in (330 mm) wheels. The semaphore turn-signal indicators were replaced with present-day front- and rear-mounted flashing lights. A slightly easier to operate remote-control gear-change was provided. Much of the improved performance was a result of different gearbox ratios. The A30 had the first three ratios close together then a big gap to top (4th gear). The A35 ratios were better spaced and gave a max speed in third of 60 mph (97 km/h) against about 45 mph (72 km/h) for the A30.

Like the A30, the A35 was offered as a 2- or 4-door saloon or 2-door "Countryman" estate and also as a van. The latter model continued in production through to 1968. A rare pickup version was also produced in 1956, with just 475 sold. The A35 passenger cars were replaced by the new body shape A40 Farina models in 1959 but the estate car version continued until 1962 and van until 1968.

The A35 was quite successfully raced in its day and can still be seen today at historic race meetings.

A model representing a 1964 version of an A35 van carrying a 1953 tax disc with the registration (HOP 2 1T), and no front "sidelights", features in the 2005 Aardman movie, Wallace & Gromit: The Curse of the Were-Rabbit. Another one was seen in A Matter of Loaf and Death with the registration DOH NUT5. In 2009 as part of the show put on in the exhibition "Wallace & Gromit present a World of Cracking Ideas" at The Science Museum a real A35 van mocked up to look like the model used in the film. 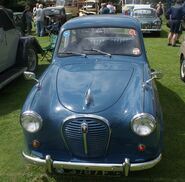 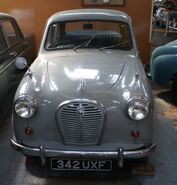 Austin A35
Add a photo to this gallery
Retrieved from "https://classiccars.fandom.com/wiki/Austin_A35?oldid=63266"
Community content is available under CC-BY-SA unless otherwise noted.