Start a Wiki
The Austin Maxi was a medium sized 5-door hatchback car from British Leyland for the 1970s. It was the first British five speed five-door hatchback.

The Maxi (code name ADO14) was the last car designed under the British Motor Corporation (BMC), and was the last production car designed by Alec Issigonis. Originally under BMC's plan it was to have been called the "Austin 1500" and a saloon version the "Morris 1500" was to follow in the Autumn. However upon the merger of BMC and Leyland the new management ditched the 4-door saloon notchback and develop the Morris Marina instead. Lord Stokes the new chairman decided to also change the hatchback's name to the Maxi in homage to the Mini 10 years earlier.

It was launched in Oporto Portugal on 24 April 1969, to a blaze of publicity being one of the first cars to appear on the BBC's new car programme Wheelbase, a forerunner to Top Gear. It was also the first car after the creation of British Leyland. It followed the five-door hatchback pattern of the French-produced Renault 16, which was European Car of the Year in 1966 following its launch in 1965.

Underneath the Maxi's practical and spacious bodyshell lay an all-new front wheel drive chassis, which was interlinked with an innovative five-speed manual transmission. The latter suffered from notorious problems with its control linkage, especially in early models which had a cable-operated linkage prone to cable stretch and other problems. These were noted by autotesters such as Vicar in "Today´s Driver" (1969) who wrote: "This is probably a good idea that just needs a little bit of working on." The later rod linkage was less problematic. All models were prone to problems brought on by the "cogs in the sump" layout, where the gearbox and engine shared a common oil supply. The clutch oil seal was also prone to leakage.

Power came from a 1485 cc, later 1748 cc (from 1971) E-Series petrol engine which would later find its way into other British Leyland products like the Austin Allegro. The 1750 and twin-carburettor 1750 HL models offered good performance by the standards of the day.

Despite the new platform, the Maxi's styling suffered from the decision to save tooling costs by carrying over door panels from the BMC ADO17 "Landcrab", which compromised the design. Another styling ambition for the car was a 4-door saloon counterpart — a prototype was built badged as a Morris, but it never made production.

The Maxi featured a spacious interior, comfortable passenger accommodation, competitive prices and reasonable running costs. But it was let down by a dull interior and poor build quality, although it was not quite as notorious for its downfalls as the Austin Allegro and Morris Marina were during the 1970s.

One unusual feature of this car was that the rear seat back, as well as folding forward as in a conventional hatchback, also folded back. In combination with fully reclining front seats this gave satisfactory, if spartan, sleeping accommodation.

Towards the end of the Maxi's life, in 1980, a lightly revised model was marketed as the "Maxi 2".

On 8 July 1981, the Austin Maxi's 12-year production life came to an end. Its effective replacement, the smaller Austin Maestro, which also replaced the smaller Allegro, was introduced in March 1983. The next new model in its sector was the Austin Montego saloon, launched in April 1984 and designed to fill the gap in British Leyland's Austin Rover range left by the demise of the Morris Ital and Austin Ambassador.

Despite its practical design and remarkable space efficiency (it is shorter, narrower and lower than the current model of Ford Fiesta) the Maxi never came close to reaching its projected sales targets, it being one of many 1970s Leyland models that came within a whisker of being world beaters. BL management decisions involving the Maxi had significant knock-on effects to the rest of the car line-up. BL marketing decreed that the Maxi should be the only car in the range to feature a hatchback. This stance was continued until the 1980s and prevented the Morris Marina, Austin Allegro and Princess models gaining hatchbacks despite those designs all being capable of receiving them. The only other BL car to have a layout approaching a hatchback was the Rover SD1 which was a large '4-door coupe/hatch', leaving the company without a car to compete with an up-coming generation of hatchbacks from Europe (most noticeably the Volkswagen Golf) and squandering the lead that BMC and BL had gained in this field. 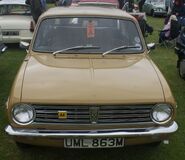 Austin Maxi
Add a photo to this gallery
Retrieved from "https://classiccars.fandom.com/wiki/Austin_Maxi?oldid=63203"
Community content is available under CC-BY-SA unless otherwise noted.