Start a Wiki
The Princess was a distinctive series of large (2 tons) luxury cars made by Austin and its subsidiary Vanden Plas from 1947 to 1968. However:

The Princess name was later also used as follows:

The first Austin Princess A120 was launched in 1947 as the most expensive flagship model in the Austin range at the same time as the A110 Austin Sheerline (designed during the war) which body was built on the same chassis at Longbridge, the A110 produced 10 less horsepower being fitted with a single carburetter. Both cars always had bodies that were massive and heavy in appearance. The Princess (model code A120) featured a body by the coachbuilder Vanden Plas and was a large saloon or limousine. The car was offered with two distinct interiors. The "DM" or limousine type had a sliding glass partition between the driver and rear passengers plus picnic tables, and the "DS" was the saloon. The saloons were successful as a top-executive car, many Princesses (and Sheerlines, for that matter) were bought for civic ceremonial duties or by hire companies as limousines for hire. The standard saloon weighed almost two tons, was 16 ft 9 inches long and 6 feet 1¼ inches wide on a 10-foot 1¼-inch (the short) wheelbase.

The Princess model was updated over the years through Mark I (A120), Mark II (A135) and Mark III versions, the largest variation being the introduction of the long-wheelbase version in 1950 with a longer body and seven seats: apart from that the bodywork and running gear didn't change much, nor did the 4-litre straight-6 engine. The radiator was fairly upright in old-fashioned style and the car had separate front wings but these cars were always more modern in style than the equivalent sized Bentley or Rolls-Royce and, for the saloon, the price was little more than two-thirds of the Rolls-Royce.

From August 1957 the Austin part of the badging was dropped so it could be sold by Nuffield dealerships. So although Austin was producing a Princess, it was no longer the Austin Princess by name. From May 1960, the Vanden Plas name was added in front of "Princess".

Much later, the Vanden Plas Princess was revived as a single model of the Leyland Princess range, built by British Leyland (BL) in the 1970s and initially sold through Austin and other dealerships; this car was never actually badged Austin Princess in the UK (though it was in some export markets) and is commonly referred to as simply the Princess.

In 1947, Austin produced two virtually identical chassis, one for the A110 later A125 Sheerline (built entirely by Austin at their Longbridge factory) and the A120 later A135 chassis used by Vanden Plas to produce the Princess at their Kingsbury works (North London). Although Vanden Plas was by now wholly owned by Austin and much of the running gear and instrumentation was the same in the two cars, the Princess was the Austin flagship, with a higher specification leather, wool and burr walnut interior. The original Princess DS1 (DM1 with glass divider between front and rear) was powered by a 3.5-litre straight six engine. This was enlarged to a 4.0-litre unit and the car was renamed the DS2 (DM2 with glass divider) without further modifications. Both the DS1 (DM1) and DS2 (DM2) were often built to order. Customers could specify the colour required and a range of different setups were available. These included triple or single carburetors and twin or single exhaust systems. Whilst the sportier multiple carb version performed better, it tended to achieve only 12 to 14 mpg. The single carb however gave fuel consumption between 22 and 27 mpg. Performance was very good for a car this size with top speed of 90 mph and acceleration 0 to 60 mph of only 20 seconds. In 1950, the Limousine version was introduced. The Chassis length and passenger area were enlarged to enable a pair of drop down seats to be mounted on the rear of the front seats and a glass division was standard. All of these early cars are now extremely rare, especially the saloon versions. Many the saloons were converted for use as taxis in the late 1950s, with Perkins diesel engines being fitted to overcome economy issues.

During the life of this model (in 1952), Austin became part of the British Motor Corporation (BMC).

1956 saw a new Austin Princess Mk IV. This thoroughly re-designed very handsome big modern styled car, the saloon replacement for the former Sheerline and A135 only stayed in the catalogue until 1959 finding very few buyers. It is believed only pre-production examples were built, each car handsomer than the previous one. There is an external link below to its sales brochures and a link to a photograph of the final dark blue pre-production example.

The old-style long wheelbase Austin Princess saloon and limousine version scarcely changed at all. It had more "integrated" front wings in the modern style, but was little changed under the skin.

The Vanden Plas name was added to Princess from July 1960.

Princess — no longer badged as an Austin then Vanden Plas Princess

The long wheelbase Princess saloon and limousine continued to be built by hand in limited numbers as the Vanden Plas 4-Litre Princess Limousine, until 1968. All now being parts of British Leyland, the Jaguar Mark X-based Daimler DS420 was initially produced at the Vanden Plas works in Kingsbury, North London then replaced the Vanden Plas Princess within the new, slightly rationalised range. This had been foreseen in 1966 when British Motor Holdings (BMH) had brought BMC and Jaguar together, and stopped development at Vanden Plas of the potential successor car. The limousine was luxuriously appointed with lots of polished wood, optional Mohair rugs and radio with controls in the armrest. Among the long list of available extras were monograms and a flagstaff. The driving compartment was separated from the rear of the car by a division with an optional telephone for the passengers to communicate with the driver. The driving seat was finished in leather but the rear seats were trimmed in cloth, the usual arrangement on many luxury cars of the time. Though not as durable as leather, cloth was considered kinder to passengers' clothes. To increase seating capacity two occasional seats could be folded out of the floor.

The car had independent coil suspension at the front with semi elliptic leaf springs and anti roll bar at the rear. The cam and peg type steering gear had optional power assistance.

In October 1959 a new Austin A99 Westminster-based Princess was launched. From July 1960 these vehicles bore the Vanden Plas name which became a badge-engineered brand in its own right (rather than being known as coachbuilder for the cars of other manufacturers). The car was a great deal smaller and less than 44 per cent of the price of the previous Princess IV Saloon and was instead largely identical to the Austin A99 Westminster and other models using the same Pininfarina-designed bodyshell. It featured a new distinctive Vanden Plas grille (fairly square, with a thick surround and vertical slats), round headlamps, and horn grilles on the front. The interior was lavish in typical Vanden Plas style, featuring burr walnut wood trim, leather seats and panels, and high-quality carpeting. A division between the driver and the rear compartment was an optional extra. Power was a 3-litre unit developing 108 hp (81 kW).

This model was replaced in 1961 by the Vanden Plas Princess Mark II. Styling was similar but the wheelbase was two inches (5 cm) longer and anti-roll bars were added to the suspension at both ends of the car. The engine was uprated to 120 hp (89 kW). Better brakes were fitted, and interior improvements included built-in drop-down "picnic tables" for the rear seat passengers. Options now included "Smith's air-conditioning".

In August 1964 the Vanden Plas Princess 4-litre R was announced. The biggest change was under the bonnet, where a new 4-litre Rolls-Royce straight-6 engine was fitted — hence the "R" in the name. The 3,909 cc over-square Rolls-Royce engine was a short-stroke version of a Rolls-Royce engine similar to that used for certain military vehicles, and boosted claimed power output to 175 bhp "gross" which provided a considerable performance increase, accompanied by wider tyres, a much higher final drive ratio and the standard inclusion of the US built Borg-Warner Model 8 automatic transmission and Hydrosteer variable ratio power steering.

The Princess 4-Litre R was presented at the London Motor Show in October 1964. Externally, the styling was more rounded and the tailfins replaced by small corner-ridges. This car was the only mass-produced civilian vehicle from another manufacturer ever to use a Rolls-Royce engine. It grew from a project which had foreseen a need for a relatively compact, mass-produced Rolls Royce; prototypes were made using the Austin-engineered central portion of the Vanden Plas, with restyled Rolls Royce and Bentley panels front and rear; neither of these models made it into production, partly due to the introduction of the Rolls-Royce Silver Shadow.

The Vanden Plas Princess 4-litre R lasted for 4 years, killed off by BMC in 1968 (just ahead of the transition to British Leyland) after about 6,555 had been built.

Two smaller BMC cars were given a Vanden Plas treatment and named as Vanden Plas Princesses, including an uprated Austin 1100 and Austin 1300, and their Mark II successors.

The final use of the "Princess" name was for the Princess 1800 / 2200 of 1975–78 and the Princess 2 1700 / 2000 / 2200 of 1978–81. This was not badged as an Austin on the home market (although it was badged as such in New Zealand), but was sometimes confused with one because for the first year of its life it was marketed (variously) as the Austin, Morris, and Wolseley 18–22 Series. It was succeeded by the Austin Ambassador in 1982 and thus marked the end of the Princess, although the Vanden Plas name would continue as the most luxurious trim level in the Rover SD1 range. 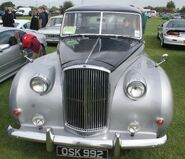 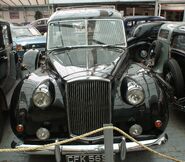 Vanden Plas Princess
Add a photo to this gallery
Retrieved from "https://classiccars.fandom.com/wiki/Austin_Princess?oldid=62467"
Community content is available under CC-BY-SA unless otherwise noted.