Start a Wiki
The 3½ Litre was presented to the public in September 1933, shortly after the death of Henry Royce, and was the first new Bentley model following Rolls-Royce's acquisition of the Bentley brand in 1931. The 3½ Litre was discontinued in 1936.

Bentley sold only the bare chassis with scuttle radiator and grille for coachbuilders to construct on it a body to the buyer's requirements. Any amendment to those provided features was most unlikely to be sanctioned by Bentley. Many distributors ordered their preferred bodies as showroom stock ready for immediate sale.

Bentleys of this era are Derby Bentleys because they were built in the Rolls-Royce factory located in Derby, England. Those of Bentley's previous independent era are Cricklewood Bentleys.

From the outset, the car was intended to compete on quality and grace rather than sporting reputation which had been the cornerstone of the pre-1931 Bentley company. The cars retained the famous curved radiator shape based on earlier Bentley models, but in all meaningful respects they were clearly Rolls-Royces. Although disappointing some traditional customers, they were well received by many others and even W.O. Bentley himself was reported as saying that he would "rather own this Bentley than any other car produced under that name." The Rolls-Royce Engineer in charge of the development project, Ernest Hives (later Lord Hives), underlined the Rolls-Royce modus operandus in a memo addressed to company staff "our recommendation is that we should make the car as good as we know how and then charge accordingly." At a time when the Ford 8 could be purchased new for £100, an early Bentley 3½ Litre cost around £1,500 (equivalent to £5.26 thousand vs. £78.9 thousand today)[1], putting it beyond the reach of all but the wealthiest consumers. Despite not being a car of remarkable outright performance, the car's unique blend of style and grace proved popular with the inter-war elite and it was advertised under the legend the silent sports car. Over 70% of the cars built between 1933 and 1939 were said to have still been in existence 70 years later.

Based on an experimental Rolls-Royce project "Peregrine" which was to have had a supercharged 2¾ L engine, the 3½ Litre was finally fitted with a less adventurous engine developed from Rolls' straight-6 fitted to the Rolls-Royce 20/25. The Bentley variant featured a higher compression ratio, sportier camshaft profile and two SU carburettors on a crossflow cylinder head. Actual power output was roughly 110 bhp (82 kW) at 4500 rpm, allowing the car to reach 90 mph (145 km/h). The engine displaced 3.7 L (3669 cc/223 in³) with a 3¼ in (82.5 mm) bore and 4½ in (114.3 mm) stroke.

A 4-speed manual transmission with synchromesh on 3rd and 4th, 4-wheel leaf spring suspension, and 4-wheel servo-assisted mechanical brakes were all common with other Rolls-Royce models. The chassis was manufactured from nickel steel, and featured a "double-dropped" layout to gain vertical space for the axles and thus keep the profiles of the cars low. The strong chassis needed no diagonal cross-bracing, and was very light in comparison to the chassis built by its contemporary competitors, weighing in at 2,510 pounds (1,140 kg) in driveable form ready for delivery to the customer's chosen coachbuilder.

1177 3½ Litre cars were built, with about half of them being bodied by Park Ward, with the remainder "dressed" by other coachbuilders like Barker, Freestone & Webb, Gurney Nutting, Hooper, Mann Egerton, Mulliner (both A and HJ), Rippon, Thrupp & Maberly, James Young, Vanden Plas and Windovers in England; Figoni, Kellner, Saoutchik and Vanvooren in Paris; and smaller concerns elsewhere in UK and Europe.

A drophead 3½ Litre was featured in the 1963 movie From Russia with Love. 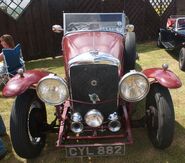 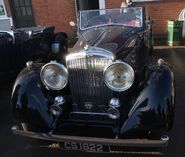 1934 Bentley 3½ Litre Drophead
Add a photo to this gallery

Retrieved from "https://classiccars.fandom.com/wiki/Bentley_3%C2%BD_Litre?oldid=68944"
Community content is available under CC-BY-SA unless otherwise noted.