Start a Wiki
The Bentley 4½ Litre is a British sports car built by Bentley Motors. Replacing the Bentley 3 Litre, it is famous for epitomizing prewar British motor racing and for its popular slogan "there's no replacement for displacement", created by the founder of Bentley, Walter Owen Bentley. Bentley sought to produce a more powerful race car by increasing engine displacement.

At the time, noted car manufacturers like Bugatti and Lorraine-Dietrich focused on designing cars to compete in the 24 Hours of Le Mans, a popular automotive endurance course established only a few years earlier. A victory in this competition quickly elevated any car maker's reputation.

A total of 720 4½ Litre were produced between 1927 and 1931, including 55 models with a supercharged engine known as the Blower Bentley. A 4½ Litre Bentley won the 24 Hours of Le Mans in 1928. Though the 4½ Litre Bentley's competitive performance was not outstanding, it set several speed records, most famously in 1932 at Brooklands with a recorded speed of 222.03 km/h (138 mph).

Bentley at the 24 Hours of Le Mans

The 24 Hours of Le Mans endurance race is a 24 hour race around the Circuit de la Sarthe. The inaugural race was held May 26–27, 1923, and attracted many drivers, mostly French. There were two foreign competitors in the first race, Frank Clement and Canadian John Duff, the latter winning the 1924 competition in his personal car, a Bentley 3 Litre.

"Made with precision and the finest material," and with recent success, the luxurious Bentley cars attracted attention. After two years without success, Bentley convened a group of wealthy British men, "united by their love of insouciance, elegant tailoring, and a need for speed," to renew Bentley's success. Both drivers and mechanics, these men, later nicknamed the "Bentley Boys", drove Bentley automobiles to victory in several races between 1927 and 1931, including four consecutive wins at the 24 Hours of Le Mans, and forged the brands reputation.

It was within this context that, in 1927, Bentley developed the Bentley 4½ Litre. Two cylinders were removed from the 6½ Litre model, reducing the displacement to 4.4 litres. At the time, the 3 Litre and the 6½ Litre were already available, but the 3 Litre was an outdated, under-powered model and the 6½ Litre's image was tarnished by poor tyre performance.

Tim Birkin and the Blower Bentley

Sir Henry "Tim" Birkin, described as "the greatest Briton of his time" by W.O. Bentley, was one of the Bentley Boys. He refused to adhere strictly to Bentley's assertion that increasing displacement is always preferable to forced induction. Birkin, aided by a former Bentley mechanic, decided to produce a series of five supercharged models for the competition at the 24 Hours de Le Mans; Mercedes-Benz had been using compressors for a few years.

Thus the Blower Bentley was born. Bentley Blower No.1 was officially presented in 1929 at the British International Motor Show at Olympia, London. The 55 copies were built to comply with 24 Hours de Le Mans regulations. Despite his dislike of the Blower, W.O. Bentley could not object to Birkin's actions, the latter having garnered the support of Woolf Barnato, the "chief" Bentley Boy, whose fortune helped Bentley avoid filing for bankruptcy in May 1926, as well as that of Dorothy Paget, a wealthy horse racing enthusiast.

The robustness of the 4½ Litre's latticed chassis, made of steel and reinforced with ties, was needed to support the heavy cast iron inline-four engine.

The engine was "resolutely modern" for the time. The displacement was 4,398 cc (268.4 cu in): 100 mm (3.9 in) bore and 140 mm (5.5 in) stroke. Two double carburetters and dual ignition with Bosch magnetos were fitted. The engine produced 110 hp (82 kW) for the touring model and 130 hp (97 kW) for the racing model. The engine speed was limited to 4,000 rpm. A single overhead camshaft actuated four valves per cylinder, inclined at 30 degrees. This was a technically advanced design at a time where most cars used only two valves per cylinder. The camshaft was driven by bevel gears on a vertical shaft at the front of the engine, as it had been on the 3 Litre engine.

The Bentley's tanks - radiator, oil and petrol - had filler caps that did not unscrew but were easily removed with one stroke of a lever. This saved time during stops.

The 4½ was equipped with a canvas top stretched over a lightweight Weymann body. The structure was very light but still resistant to wind. (The rules of the 24 Hours of Le Mans between 1924 and 1928 dictated a certain number of laps for which the hood needed to be closed). The steering wheel measured about 45 cm (18 in) in diameter, and was a solid braided rope held tight for optimal operation.

By contrast, the brakes were conventional, consisting of 17-inch (430 mm) drum brakes, finned for improved cooling and operated by cable. Semi-elliptic leaf springs were used at front and rear.

The essential difference between the Bentley 4½ Litre and the Blower was that the Blower engine was supercharged by a Roots-type compressor designed by engineer Amherst Villiers. W.O. Bentley was hostile to forced induction and believed that "to supercharge a Bentley engine was to pervert its design and corrupt its performance." He refused to allow the engine to be modified to incorporate the compressor, which was therefore placed at the end of the crankshaft, in front of the radiator, giving the Blower Bentley a unique and easily recognisable profile and exacerbating its understeer. A guard protected the two carburetters located at the compressor intake. (Similar protection was used (both in the 4½ Litre and the Blower) for the fuel tank at the rear, because a flying stone punctured the 3 Litre of Frank Clement and John Duff during the first 24 Hours of Le Mans, possibly depriving them of victory).

Between 1927 and 1931 the Bentley 4½ Litre competed in several competitions, primarily the 24 Hours of Le Mans. The first was the Old Mother Gun at the 1927 24 Hours of Le Mans, driven as a prototype before production. Favored to win, it instead crashed and did not finish. Its performance was sufficient for Bentley to decide to start production and deliver the first models the same year.

Far from being the most powerful in the competitions, the 4½ Litre of Woolf Barnato and Bernard Rubin, raced neck and neck against Charles Weymann's Stutz Blackhawk DV16, setting a new record average speed of 111.12 km/h (69 mph); Tim Birkin and Jean Chassagne finished fifth. The next year, three 4½ Litres finished second, third, and fourth behind another Bentley, the Speed Six, which possessed two more cylinders.

The naturally aspirated 4½ Litre was noted for its good reliability. The supercharged models were not; the two Blower models entered in the 1930 24 Hours of Le Mans by Dorothy Paget, one of which was co-driven by Tim Birkin, did not complete the race. In 1930, Birkin finished second in the French Grand Prix at the Circuit de Pau behind a Bugatti Type 35. Ettore Bugatti, annoyed by the performance of Bentley, called the 4½ Litre the "fastest truck in the world." The Type 35 is much lighter and consumes much less petrol. Blower Bentleys consume 4 liters per minute at full speed.

In November 1931, after selling 720 copies of the 4½ Litre - 655 aspirated and 55 supercharged - in three different models (Tourer, Drophead Coupé and Sporting Four Seater), Bentley was forced to sell his company to Rolls-Royce for £125,175, a victim of the recession that hit Europe following the Wall Street Crash of 1929.

Today, Bentley 4½ Litre automobiles from this pre-war period, the "Belle Époque" of the automobile for some, sell for around €100,000 and Blowers can fetch more than €1.5 million. The Blower is the most iconic pre-war Bentley and is coveted by collectors despite never winning a single race. For many, the 4½ Litre is to automobiles what the Spitfire is to aircraft.

Ian Fleming's character James Bond drives a 1930 Blower Bentley in three of the 007 Novels, Casino Royale, Live and Let Die and Moonraker. In the books, Bond drives one of the last Blower Bentleys built, a battleship grey Convertible Coupé, with French Marchal headlamps. 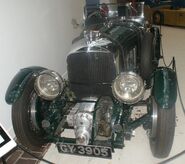 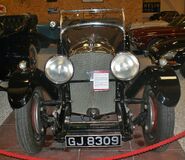 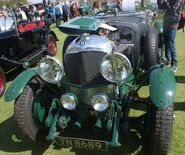 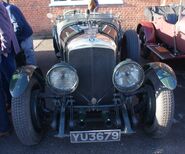 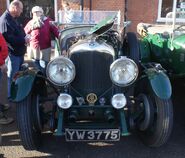 1928 Bentley 4½ Litre
Add a photo to this gallery
Retrieved from "https://classiccars.fandom.com/wiki/Bentley_4%C2%BD_Litre?oldid=68946"
Community content is available under CC-BY-SA unless otherwise noted.