Start a Wiki
The Bentley S1 was a luxury car produced by Bentley Motors Limited from 1955 until 1959.

This shape remained in production with those modifications until late 1965 when it was replaced with the completely new chassisless monocoque T series.

It was announced at the end of April 1955, and it was noted that the existing Continental model would continue. The new standard steel saloon replaced the R type standard steel saloon which had been in production, with modifications, since 1946. It was a more generously-sized five or six seater saloon with the body manufactured in pressed steel with stressed skin construction. Doors, bonnet and luggage locker lid were of aluminium.

Having a totally new external appearance, although with the traditional radiator grille, the main differences from the R type were:

As with the preceding Mark VI and R type Bentleys, there was almost no difference between standard Bentley and Rolls-Royce models; this Bentley S differing only in its radiator grille shape and badging from the Rolls-Royce Silver Cloud I. 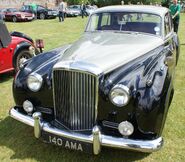 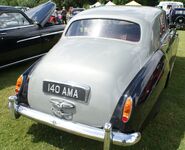 Bentley S1
Add a photo to this gallery

Retrieved from "https://classiccars.fandom.com/wiki/Bentley_S1?oldid=69164"
Community content is available under CC-BY-SA unless otherwise noted.