The Bentley S3 is a four-door luxury car produced by Bentley from late 1962 until 1965.

The S3 was very similar to the S2. The most-visible difference was a four-headlamp layout that paved the way for the radically new Bentley T1 in 1965. The interior was modified with individual seats for front passengers and increased leg room in the rear. The 6.2 L (6230 cc/380 in³) V8 engine continued with minor modifications. The power steering was also improved.

In 1959, Rolls-Royce acquired H. J. Mulliner & Co., coachbuilders (HJM). In 1961, HJM was merged with Park Ward, which had been in the possession of Rolls-Royce since 1939, to form Mulliner, Park Ward Ltd. (MPW). When production of the S3 Continentals commenced there were more differences than the adaption of the previous HJM design by Mulliner Park Ward: The cars were built at the former Park Ward premises in Willesden, North London. The HJM facilities were abandoned.

The S3 Continental was strictly coachbuilt. Most bodies were of the altered HJM style, available in fixed head or drop head coupe form. Of the 328 coachbuilt S3 (Continentals included here), nearly 100 were by MPW. Again, fixed head or a drop head coupe configurations were available. The most prominent visual difference from the s2 configuration was the four canted headlights.

For the first time, this body was offered on the Rolls-Royce Silver Cloud, as well as the S3 chassis. The final S3 was delivered in 1966, when the new Rolls-Royce Silver Shadow and Bentley T-series were readily available.Like earlier Continentals, the sportier S3 bodywork was manufactured entirely from aluminum, unlike the heavier, steel bodied standard saloon. This, combined with higher gearing and the better compression ratios made for a markedly faster car. Four-doored Continentals bodied by H. J. Mulliner were known as the "Flying Spur", although four-door Continentals by other coachbuilders are sometimes erroneously referred to as "Flying Spurs" as well; the term only correctly refers to Mulliner's versions. Another strikingly elegant four-door saloon for the S3 Continental came from James Young).

Despite being highly desirable, the considerably more expensive Continentals (a premium of 40-50%) were produced in much smaller quantities than the standard S3 saloon, which outsold it by a factor of four. 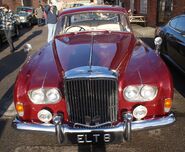 Bentley Continental S3
Add a photo to this gallery

Retrieved from "https://classiccars.fandom.com/wiki/Bentley_S3?oldid=68698"
Community content is available under CC-BY-SA unless otherwise noted.