The Bristol 403 is a luxury car which was produced between 1953 and 1955 by British manufacturer Bristol Aeroplane Co. (whose car division later became Bristol Cars). The 403 was the third of the eventual five series of Bristols powered by the BMW-derived pushrod straight-six engine. It replaced the Bristol 401 and 402 in 1953 and continued production for two years.

To cope with this increased power, an anti-roll bar was fitted on the front suspension and improved drum brakes known as "Alfins" (Aluminum finned) were fitted. Early models had them on all wheels, but Bristol thought the car was over-braked and they were thus restricted to the front wheels on later 403s.

The 403 was the last Bristol to feature a BMW-style radiator grille. It is also noteworthy for having two extra headlamps at the side, almost pre-dating the adoption of the four-headlamp layout in larger cars (Bristol themselves adopted it with the 411 in the late 1960s). 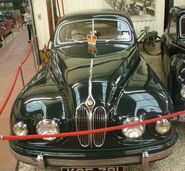 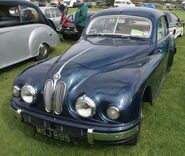 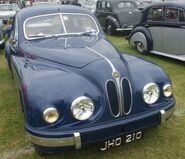 Bristol 403
Add a photo to this gallery

Retrieved from "https://classiccars.fandom.com/wiki/Bristol_403?oldid=63273"
Community content is available under CC-BY-SA unless otherwise noted.