Start a Wiki
Chrysler Group LLC ( /ˈkraɪslər/) is an American-based, multinational automaker, in global strategic alliance with Italian manufacturer Fiat since 2009. Its core brands which it produces are Chrysler, Jeep, Dodge, Ram, SRT, Fiat, and Mopar vehicles and products. The Company is headquartered in Auburn Hills, Michigan, United States. Chrysler was first organized as the Chrysler Corporation in 1925.

Walter Chrysler arrived at the ailing Maxwell-Chalmers company in the early 1920s. He was hired to overhaul the company's troubled operations (after a similar rescue job at the Willys-Overland car company). In late 1923 production of the Chalmers automobile was ended.

In January 1924, Walter Chrysler launched the well-received Chrysler automobile. The Chrysler was a 6-cylinder automobile, designed to provide customers with an advanced, well-engineered car, but at a more affordable price than they might expect. (Elements of this car are traceable to a prototype which had been under development at Willys during Chrysler's tenure). The original 1924 Chrysler included a carburetor air filter, high compression engine, full pressure lubrication, and an oil filter, features absent from most autos at the time. Among the innovations in its early years were the first practical mass-produced four-wheel hydraulic brakes, a system nearly completely engineered by Chrysler with patents assigned to Lockheed, and rubber engine mounts to reduce vibration. Chrysler also developed a wheel with a ridged rim, designed to keep a deflated tire from flying off the wheel. This wheel was eventually adopted by the auto industry worldwide.

Following the introduction of the Chrysler, the Maxwell was dropped after its 1925 model year run, although in truth the new line of lower-priced 4-cylinder Chryslers which were then introduced for the 1926 model year were basically Maxwells which had been re-engineered and rebranded. It was during this time period of the early 1920s that Walter Chrysler assumed the presidency of Maxwell, with the company then ultimately incorporated under the Chrysler name.

Following the introduction of the Chrysler, the Maxwell brand was dropped after the 1925 model year. The new, lower-priced four-cylinder Chryslers introduced for the 1926 year were badge-engineered Maxwells. The advanced engineering and testing that went into Chrysler Corporation cars helped to push the company to the second-place position in U.S. sales by 1936, a position it would last hold in 1949.

In 1928, the Chrysler Corporation began dividing its vehicle offerings by price class and function. The Plymouth brand was introduced at the low-priced end of the market (created essentially by once again reworking and rebadging Chrysler's four-cylinder model). At the same time, the DeSoto brand was introduced in the medium-price field. Also in 1928, Chrysler bought the Dodge Brothers automobile and truck company and continued the successful Dodge line of automobiles and Fargo range of trucks. By the mid-1930s, the DeSoto and Dodge divisions would trade places in the corporate hierarchy.

The Imperial name had been used since 1926, but was never a separate make, just the top-of-the-line Chrysler. In 1955, the company decided to spin it off as its own make and division to better compete with its rivals, Lincoln and Cadillac. Imperial would see new body styles introduced every two to three years, all with V8 engines and automatic transmissions, as well as technologies that would filter down to Chrysler corporation's other models. Imperial was folded back into the Chrysler brand in 1973.

The Valiant was also introduced for 1960 as a distinct brand. In the U.S. market, Valiant was made a model in the Plymouth line for 1961 and the DeSoto make was discontinued during 1961. With those exceptions per applicable year and market, Chrysler's range from lowest to highest price from the 1940s through the 1970s was Valiant, Plymouth, Dodge, DeSoto, Chrysler, and Imperial.

Special programs for the government

During World War II, essentially all of Chrysler's facilities were devoted to building military vehicles (but not the Jeep; this brand came much later after Chrysler acquired American Motors Corporation). One of Chrysler’s most significant contributions to the war effort, however, was not in the field of vehicles but in the radar field. The Chrysler tanks were far superior to Ford or General Motors tanks. They used 5 flathead 6 engines in a radial design where the tank could keep going if one engine was disabled. They were also designing a hemi-engined fighter plane, never made it into production.

When the Radiation Laboratory at MIT was established in 1941 to develop microwave radars, one of the first projects resulted in the SCR-584, the most widely recognized radar system of the war era. This system included a parabolic antenna six feet in diameter that was mechanically aimed in a helical pattern (round and round as well as up and down).

For the final production design of this antenna and its highly complex drive mechanism, the Army’s Signal Corps Laboratories turned to Chrysler's Central Engineering Office. There, the parabola was changed from aluminum to steel, allowing production forming using standard automotive presses. To keep weight down, 6,000 equally spaced holes were drilled in the face (this had no effect on the radiation pattern). The drive mechanism was completely redesigned, using technology derived from Chrysler’s research in automotive gears and differentials. The changes resulted in improved performance, reduced weight, and easier maintenance. A large portion of the Dodge plant was used in building 1,500 of the SCR-584 antennas as well as the vans used in the systems.

In April 1950, the U.S. Army established the Ordnance Guided Missile Center (OGMC) at Redstone Arsenal, adjacent to Huntsville, Alabama. To form OGMC, over 1,000 civilian and military personnel were transferred from Fort Bliss, Texas. Included was a group of German scientists and engineers led by Wernher von Braun; this group had been brought to America under Project Paperclip. OGMC designed the Army's first short-range ballistic missile, the PGM-11 Redstone, based on the WWII German V-2 missile. Chrysler established the Missile Division to serve as the Redstone prime contractor, setting up an engineering operation in Huntsville and for production obtaining use from the U.S. Navy of a large plant in Warren, Michigan. The Redstone was in active service from 1958 to 1964; it was also the first missile to test-launch a live nuclear weapon, first detonated in a 1958 test in the South Pacific.

Working together, the Missile Division and von Braun's team greatly increased the capability of the Redstone, resulting in the PGM-19 Jupiter, a medium-range ballistic missile. In May 1959, a Jupiter missiles launched two small monkeys into space in a nose cone on a Jupiter; this was America's first successful flight and recovery of live space payloads. Responsibility for deploying Jupiter missiles was transferred from the Army to the Air Force; armed with nuclear warheads, they were first deployed in Italy and Turkey during the early 1960s.

In July 1959, NASA chose the Redstone missile as the basis for the Mercury-Redstone Launch Vehicle to be used for suborbital test flights of the Project Mercury spacecraft. Three unmanned MLRV launch attempts were made between November 1960 and March 1961, two of which were successful. The MLRV successfully launched the chimpanzee Ham, and astronauts Alan Shepard and Gus Grissom on three suborbital flights in January, May and July 1961.

America's more ambitious manned space travel plans included the design of the Saturn series of heavy-lift launch vehicles by a team headed by Wernher von Braun. Chrysler's Huntsville operation, then designated the Space Division, became Marshall Space Flight Center’s prime contractor for the first stage of the Saturn I and Saturn IB versions. The design was based on a cluster of Redstone and Jupiter fuel tanks, and Chrysler built it for the Apollo program in the Michoud Assembly Facility in East New Orleans, one of the largest manufacturing plants in the world. Between October 1961 and July 1975, NASA used ten Saturn Is and nine Saturn IBs for suborbital and orbital flights, all of which were successful. 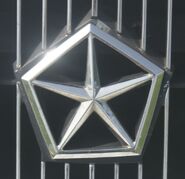 Chrysler Badge
Add a photo to this gallery
Trending pages

C
D
E
I
Retrieved from "https://classiccars.fandom.com/wiki/Category:Chrysler?oldid=45459"
Community content is available under CC-BY-SA unless otherwise noted.