The Ford Motor Company (usually called Ford), is an American multinational corporation that manufactures automobiles. The automaker was founded by Henry Ford in Dearborn, Michigan, United States (where the company is currently headquartered), and incorporated in 1903. In its twentieth century heyday, Ford, along with General Motors and Chrysler, were known as Detroit's "Big Three" automakers, companies that dominated the American auto market. Toyota surpassed Ford in revenue starting in 2004. Ford remains one of the world's ten largest corporations by revenue.

Ford introduced methods for large-scale manufacturing of cars, and large-scale management of an industrial workforce, especially elaborately engineered manufacturing sequences typified by the moving assembly lines. Henry Ford's combination of highly efficient factories, highly paid workers, and low prices revolutionized manufacturing and came to be known around the world as Fordism by 1914.

Ford was launched from a converted wagon factory in 1903, with $28,000 cash from twelve investors. During its early years, the company produced just a few cars a day at its factory on Mack Avenue in Detroit. Groups of two or three men worked on each car from components made to order by other companies.

In 1908, the Ford company released the Ford Model T. The first Model Ts were built at the Piquette Manufacturing Plant. The company moved production to the much larger Highland Park Plant to keep up with the demand for the Model T, and by 1913 had developed all of the basic techniques of the assembly line and mass production. Ford introduced the world's first moving assembly line that year, which reduced chassis assembly time from 12½ hours in October to 2 hours, 40 minutes. However these innovations were not popular and turnover of workers was very high. Turnover meant delays and extra costs of training, and use of slow workers. In January 1914 solved the problem by doubling pay to $5 a day, cutting shifts from nine hours to an eight hour day, and instituting hiring practices that identified the best workers. Productivity soared and employee turnover plunged, as the cost per vehicle plummeted. Ford cut prices again and again and invented the system of franchised dealers who were loyal to his brand name.

By the end of 1913, Ford was producing 50% of all cars in the United States, and by 1918 half of all cars in the country were Model T's. Henry Ford is reported to have said that "any customer can have a car painted any color that he wants so long as it is black." This was because black paint was quickest to dry; earlier models had been available in a variety of colors.

In 1919, Edsel Ford succeeded his father as president of the company, although Henry Ford still kept a hand in management. Although prices were kept low through highly efficient engineering, the company used an old-fashioned personalized management system, and neglected consumer demand for upscale vehicles. It steadily lost market share to General Motors Corportion and Chrysler, as these and other domestic and foreign competitors began offering fresher automobiles, with more innovative features and luxury options. GM had a range of models from relatively cheap to luxury, tapping all price points in the spectrum, while less wealthy people purchased used Model T's. The competitors also opened up new markets by extending credit for purchases, so consumers could buy these expensive automobiles with monthly payments. Ford initially resisted that approach, insisting that such debts would ultimately hurt the consumer and the general economy. Ford eventually joined in the credit markets in December 1927, when Ford unveiled the redesigned Model A, and retired the Model T after producing 15 million of them.

In 1925, Ford expanded its reach into the luxury auto market through its acquisition of the Lincoln Motor Company, and the Mercury division was established in the 1930s to serve the mid-price auto market.

Henry Ford II, grandson of Henry Ford, served as President from 1945-1960, and as Chairman and CEO from 1960-1980. "Hank the Deuce" led Ford to became a publicly traded corporation in 1956. However, the Ford family maintains about 40% controlling interests in the company, through a series of Class B preferred stocks.

In 1946 Robert S. McNamara joined Ford Motor Company as manager of planning and financial analysis. He advanced rapidly through a series of top-level management positions to the presidency of Ford on 9 November 1960 one day after Kennedy's election. The first company head selected outside the Ford family, McNamara received substantial credit for Ford's expansion and success in the postwar period. Less than five weeks after becoming president at Ford, he accepted Kennedy's invitation to join his cabinet, as Secretary of Defense. He served in that post from January 21, 1961 - February 29, 1968

In the 1950s, Ford introduced the iconic Thunderbird in 1955 and the Edsel brand automobile line in 1958; Edsel is cancelled after less than 27 months in the marketplace in November 1960. The corporation bounced back from the failure of the Edsel by introducing its compact Ford Falcon in 1960 and the Mustang in 1964. By 1967, Ford of Europe was established.

Lee Iacocca was involved with the design of several successful Ford automobiles, most notably the Ford Mustang; he was also the "moving force," as one court put it, behind the notorious Ford Pinto. He promoted other ideas which did not reach the marketplace as Ford products. Eventually, he became the president of the Ford Motor Company, but he clashed with Henry Ford II and ultimately, in 1978, he was famously fired by Henry II, despite Ford posting a $2 billion dollar profit for the year.

During World War II, Ford began to switch many of its factories in the U.S.A. to tank factories, to aid in the war effort. Henry saw this as a business opportunity, and possibly a way to become more popular and make customers think of them as more patriotic.

Today, Ford Motor Company manufactures automobiles under the Lincoln and Mercury brand names. In 1958, Ford introduced a new marque, the Edsel, but poor sales led to its discontinuation in 1960. Later, in 1985, the Merkur brand was introduced; it met a similar fate in 1989.

Ford has major manufacturing operations in Canada, Mexico, the United Kingdom, Germany, Brazil, Argentina, Australia, China, and several other countries, including South Africa where, following divestment during apartheid, it once again has a wholly-owned subsidiary. Ford also has a cooperative agreement with Russian automaker GAZ.

Since 1989, Ford has acquired British nameplates Aston Martin, Jaguar, Daimler (div. of Jaguar), and Land Rover, and Volvo Cars from Sweden, as well as a controlling share (33.4%) of Mazda of Japan, with which it operates an American joint venture plant in Flat Rock, Michigan called Auto Alliance. It has spun off its parts division under the name Visteon. Its prestige brands, with the exception of Lincoln, are managed through its Premier Automotive Group.

Ford's non-manufacturing operations include organizations such as automotive finance operation Ford Motor Credit Company. Ford also sponsors numerous events and sports facilities around the nation, most notably Ford Center in downtown Oklahoma City and Ford Field in downtown Detroit. It is also notable that both facilities share design aesthetics in addition to their common name and similar downtown location!

Initially, Ford models sold outside the U.S. were essentially versions of those sold on the home market, but later on, models specific to Europe were developed and sold. Attempts to globalize the model line have often failed, with Europe's Ford Mondeo selling poorly in the United States, while U.S. models such as the Ford Taurus have fared poorly in Japan and Australia, even when produced in right hand drive. The small European model Ka, a hit in its home market, did not catch on in Japan, as it was not available as an automatic. The Mondeo was dropped by Ford Australia, because the segment of the market in which it competes had been in steady decline, with buyers preferring the larger local model, the Falcon. One recent exception is the Focus — The European model has sold strongly on both sides of the Atlantic.

At first, Ford in Germany and the United Kingdom built different models from one another until the late 1960s, with the Ford Escort and then the Ford Capri being common to both companies. Later on, the Ford Taunus and Ford Cortina became identical, produced in left hand drive and right hand drive respectively. Rationalisation of model ranges meant that production of many models in the UK switched to elsewhere in Europe, including Belgium and Spain as well as Germany. The Ford Sierra replaced the Taunus and Cortina in 1982, drawing criticism for its radical aerodynamic styling, which was soon given nicknames such as "Jellymould" and "The Salesman's Spaceship".

Increasingly, Ford Motor Company has looked to Ford of Europe for its "world cars," such as the Mondeo, Focus, and Fiesta, although sales of European-sourced Fords in the U.S. have been disappointing. In Asia, models from Europe are not as competitively priced as Japanese-built rivals, nor are they perceived as reliable. The Focus has been one exception to this, which has become America's best selling compact car since its launch in 2000.

In 2001, Ford ended car production in the UK. It was the first time in more than eighty years that Ford cars had not been made in Britain, although production of the Transit van continues at the company's Southampton facility, engines at Bridgend and Dagenham, and transmissions at Halewood. Development of European Ford is broadly split between Dunton in Essex (powertrain, Fiesta/Ka and commercial vehicles) and Cologne (body, chassis, electrical, Focus, Mondeo) in Germany. Ford also produced the Thames range of commercial vehicles although the use of this brand name was discontinued circa 1965. It owns the Jaguar, Land Rover, and Aston Martin car plants in Britain which are still operational. Ford's Halewood Assembly Plant was converted to Jaguar production.

Ford also owns a joint venture production plant in Turkey. Ford-Otosan, established in the 1970s, manufactures the Transit Connect compact panel van as well as the "Jumbo" and long wheelbase versions of the full-size Transit. This new production facility was set up near Kocaeli in 2002, and its opening marked the end of Transit assembly in Genk. Another joint venture plant near Setubal in Portugal, set up in collaboration with Volkswagen, assembles the Galaxy people carrier as well as its sister ship, the VW Sharan. 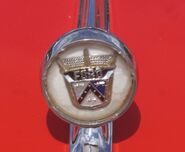 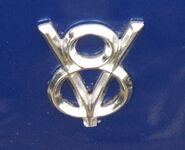 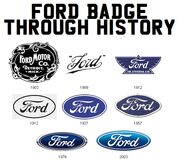 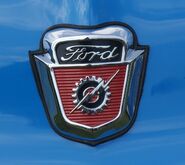 1950 Ford Badge
Add a photo to this gallery
Trending pages

1
B
C
E
F
Next
Retrieved from "https://classiccars.fandom.com/wiki/Category:Ford?oldid=45908"
Community content is available under CC-BY-SA unless otherwise noted.