Lancia (Lan-cia) is an Italian automobile manufacturer founded in 1906 by Vincenzo Lancia and which became part of the Fiat group in 1969. The company has a long history of producing distinctive cars and also has a strong rally heritage. Modern Lancias are renowned for presenting a more luxurious alternative to the models in the Fiat range upon which they are based. One of the firm's trademarks is the use of letters of the Greek alphabet as the names of its models.

Lancia is famous for many automotive innovations. These include the first full-production V6 engine, in the 1950 Aurelia, and earlier experiments with V8 and V12 engine configurations. It was also the first company to produce a V6 engine and a V4 engine (although these were later found to be unreliable).

Association with other Manufacturers

Lancia was not closely associated with any other manufacturer until the 1960s. By this time, their expensive and high standards of production had become unsustainable. In aiming to produce a product of the highest quality, company bosses had sacrificed cost-effectiveness and when Fiat launced a take-over bid in 1969, there was no choice but to accept. Many were concerned that this would be the end of the distinctive Lancia brand but exciting new models such as 1970's Stratos served to prove that Fiat wished to preserve the image of the brand it had acquired.

During the 1980s, the company cooperated with Saab Automobile, with the Lancia Delta being sold as the Saab 600 in Sweden. The 1985 Lancia Thema also shared a platform with the Saab 9000, Fiat Croma and the Alfa Romeo 164.

Lancia in the UK

Around the same time, Lancias in the UK suffered an increasing image problem due to their tendency of rusting. Fiat was at this time using Russian steel which was less durable than that used by the majority of other manufacturers and this had led to some corrosion issues. Unlike Fiat however, the Lancia brand could not survive and the last right hand drive model was sold in the UK in 1994. Despite this a thriving owners club continued to fly the flag, with approximately 2000 members, the Lancia Motor Club continues to support the marque, and celebrated the clubs' 50th anniversary in 1997 with an event that attracted over 500 Lancias many coming from overseas. However, as of September 2006, it has been announced that the brand will return to the country with a right hand drive version of its new Delta in 2009.

Lancia in the USA

Whilst some earlier models had been imported on a small scale in the 1950s and 1960s, Lancias were officially sold in the United States from 1977. Sales were comparatively slow and the range was withdrawn at the same time as Fiat in 1984. Despite this, they have maintained some limited popularity; there is an American Lancia Club for example. 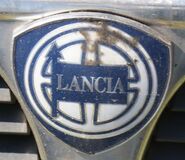 Lancia Badge
Add a photo to this gallery
Trending pages

L
Retrieved from "https://classiccars.fandom.com/wiki/Category:Lancia?oldid=49482"
Community content is available under CC-BY-SA unless otherwise noted.