Vauxhall Motors (pronounced /ˈvɒksɔːl/) (registered name General Motors UK Limited) is a British automotive company owned by General Motors (GM) and headquartered in Luton. It was founded in 1857 as a pump and marine engine manufacturer, began manufacturing cars in 1903 and was acquired by GM in 1925. It has been the second-largest selling car brand in the UK for over two decades.

Since the late 1980s Vauxhall products have been largely identical to those of Opel, GM's German subsidiary, and most models are principally designed in Rüsselsheim, Germany.

The griffin emblem, which is still in use, is derived from the coat of arms of Falkes de Breauté, a mercenary soldier who was granted the Manor of Luton for services to King John in the thirteenth century. By marriage, he also gained the rights to an area near London, south of the Thames. The house he built, Fulk's Hall, became known in time as Vauxhall. Vauxhall Iron Works adopted this emblem from the coat of arms to emphasise its links to the local area. When Vauxhall Iron Works moved to Luton in 1905, the griffin emblem coincidentally returned to its ancestral home.

The logo as pictured used to be square, but it is now circular, to enable it to fit in the same recess designed for the circular Opel emblem. Since the 1920s, the griffin has been redesigned and released 9 times. 2008 saw the release of a revised version of the 2005 logo. Bill Parfitt, Chairman and Managing Director of GM UK, said, "While the new-look Griffin pays homage to our 100 year-plus manufacturing heritage in the UK, it also encapsulates Vauxhall’s fresh design philosophy, first showcased in the current Astra, and set to continue with Insignia."

Alexander Wilson founded the company in the Dusian Road, Vauxhall, London in 1857. Originally named Alex Wilson and Company, then Vauxhall Iron Works, the company built pumps and marine engines. In 1903, the company built its first car, a five-horsepower model steered using a tiller, with two forward gears and no reverse gear. This led to a better design which was made available for sale.

To expand, the company moved the majority of its production to Luton in 1905. The company continued to trade under the name Vauxhall Iron Works until 1907, when the modern name of Vauxhall Motors was adopted. The company was characterised by its sporting models, but after World War I the company's designs were more austere.

Much of Vauxhall's success during the early years of Vauxhall Motors was due to a man called Laurence Pomeroy. Pomeroy joined Vauxhall in 1906 as an assistant draughtsman, at the age of twenty-two. In the winter of 1907/8, the chief designer F.W. Hodges took a long holiday, and in his absence the managing director Percy Kidner asked Pomeroy to design an engine for cars to be entered in the 1908 RAC and Scottish Reliability Trial, held in June of that year. The cars were so successful that Pomeroy took over from Hodges.

His first design, the Y-Type Y1, had outstanding success at the 1908 RAC and Scottish 2000 Mile Reliability Trials – showing excellent hill climbing ability with an aggregate of 37 seconds less time in the hill climbs than any other car in its class. With unparalleled speeds around the Brooklands circuit, the Vauxhall was so far ahead of all other cars of any class that the driver could relax, accomplishing the 200 miles (320 km) at an average speed of 46 mph (74 km/h), when the car was capable of 55 mph (89 km/h). The Y-Type went on to win class E of the Trial.

The Y-Type was so successful that it was decided to put the car into production as the A09 car. This spawned the legendary Vauxhall A-Type. Four distinct types of this were produced between 27 October 1908 – up to when mass production halted in 1914. One last A-Type was put together in 1920. Capable of up to 100 mph (160 km/h), the A-Type Vauxhall was one of the most acclaimed 3-litre cars of its day.

Two cars were entered in the 1910 Prince Henry Trials, and although not outright winners, performed well, and replicas were made for sale officially as the C-type – but now known as the Prince Henry.

During the First World War, Vauxhall made large numbers of the D-type, a Prince Henry chassis with de-rated engine, for use as staff cars for the British forces.

After the 1918 armistice, the D-type remained in production, along with the sporting E-type. Pomeroy left in 1919, moving to the United States, and was replaced by C.E. King. In spite of making good cars, expensive pedigree cars of the kind that had served the company well in the prosperous pre-war years were no longer in demand: the company struggled to make a consistent profit and Vauxhall looked for a major strategic partner.

In 1925, Vauxhall was acquired by GM for US$2.5 million. The company's image and target market were quickly changed, marked particularly by the introduction in 1931 of the first Bedford truck, which was Chevrolet based, along with the low-cost two-litre Vauxhall Cadet. The company's future chief engineer, Harold Drew, left Luton for a spell working as a draughtsman with GM's Lansing-based Oldsmobile division. As the first significant post-acquisition passenger car, the Cadet, initially retailing at £280, is generally regarded as demonstrating Vauxhall's newly acquired interest and expertise in controlling production costs, but it was also noteworthy as the first British car to feature a synchromesh gearbox.

The influence of the American parent was pervasive, and together with the Ford Motor Company, Vauxhall's main competitor, led to a wave of American influenced styling in Europe that persisted through to the 1980s. Bedford Vehicles, a subsidiary constructing commercial vehicles, was established in 1930 as the Stock Market Crash of 1929 had made importing American trucks uneconomical.

During World War II, car production at Luton was suspended to allow Vauxhall to work on the new Churchill tank, taking it from specification to production in less than a year, and assembled there (as well as at other sites). Over 5,600 Churchill tanks were built. Luton also produced around 250,000 lorries for the war effort, Bedford designs being common in British use.

Passenger car production resumed after the end of the Second World War. Models were more mass-market than pre-war products, helping to drive an expansion of the company. A manufacturing plant at Ellesmere Port, Cheshire, was opened in 1962, initially making components to supply to the production lines in Luton, before passenger car production began there in 1964.

During the 1960s, Vauxhall acquired a reputation for making rust-prone models, though in this respect, most manufacturers were equally bad. The corrosion protection built into models was tightened up significantly, but the reputation dogged the company until the early 1980s.

By the late 1960s, the company was achieving five-figure sales on its most popular models, including the entry-level Viva and larger Victor.

Vauxhall's fortunes improved during the 1970s, with an updated version of the Viva continuing to sell in huge volumes.

By 1973, however, the Victor was losing sales in a market that was becoming increasingly dominated by the Ford Cortina. The Viva was still among the most popular cars in Britain, as a facelift in 1970 stopped the design from becoming too outdated. But this wasn't enough to keep Vauxhall from being well behind market leaders Ford and British Leyland in the sales charts, and most of its range was struggling even to keep pace with Chrysler UK (formerly the Rootes Group). Vauxhall's sales began to increase in 1975, with the launch of two important new models – the Chevette, a small three-door hatchback that was the first car of its kind to be built in Britain, the Chevette carrying the name Opel Kadett in Europe, and Chevrolet Chevette and in the US and Canadian markets; and the Cavalier (Opel Ascona elsewhere), a stylish four-door saloon designed to compete head-to-head with the all-conquering Ford Cortina. By the end of the 1970s, Vauxhall had boosted its market share substantially, and was fast closing in on Ford and British Leyland.

By 1979, Vauxhall had increased its market share substantially; it was still some way behind Ford and British Leyland, but had overtaken Talbot (the successor organisation to Rootes and Chrysler UK). At the end of 1979, Vauxhall moved into the modern family hatchback market with its Astra, (Opel Kadett elsewhere) range that replaced the ageing Viva and Chevette models. The Astra quickly became popular with buyers, but the 1981 Mk2 Cavalier – the first Vauxhall of this size to offer front-wheel drive]] and a hatchback bodystyle – was the car that really boosted Vauxhall's fortunes. The 1983 Nova (Opel Corsa elsewhere) supermini, an addition to the Vauxhall line up, completed Vauxhall's regeneration, and it soon overtook Austin Rover (formerly British Leyland) as Britain's second most popular carmaker. The Astra further strengthened its position in the market with an all-new 1984 model that featured an aerodynamic design reminiscent of Ford's larger Sierra.

Vauxhall's most important model of the 1980s was the 1981 Mk2 Cavalier, which made the transition from rear-wheel drive saloon to front-wheel drive hatchback (though there was still a saloon version available, complemented in 1983 with an estate). For much of its life, it was Britain's most popular large family car, vying with the Ford Sierra for top place. The Cavalier was relaunched in 1988, an all-new format which won praise for its sleek looks and much-improved resistance to rust. 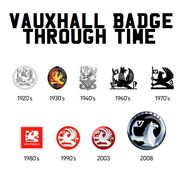 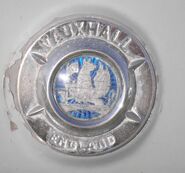 Vauxhall Badge
Add a photo to this gallery
Trending pages

B
V
Retrieved from "https://classiccars.fandom.com/wiki/Category:Vauxhall?oldid=15412"
Community content is available under CC-BY-SA unless otherwise noted.