Volvo Car Corporation, or Volvo Personvagnar, is an automobile maker that was founded in 1927 in the city of Gothenburg in Sweden. Volvo, which is Latin for "I roll," was formed as a spin-off from roller ball bearing maker SKF. Volvo Cars was owned by AB Volvo until 1999, when it was acquired by the Ford Motor Company and placed in its Ford Premier Automotive Group. Globally, Volvo is marketed as a premium car, with the intent to compete with Acura, Audi, BMW, Cadillac, Infiniti, Lexus, Mercedes-Benz and Saab. Volvo has 2,500 dealerships worldwide in 100 markets; 60% of sales come from Europe, 30% from North America, and the other 10% is from the rest of the world. As a premium car manufacturer, Volvo's flagship models tend to be luxurious, while their entry-level models do not.

Since the 1950s, Volvo cars have had a reputation for safety, starting in 1944 with the use of laminated glass in the PV model. The PV series cars were also among the first to have what Volvo called a 'safety body' (what is now called a unibody). The Volvo design team invented both the 'safety cage' and 'crumple zone' concept, where passengers are protected in a strong, encircling frame and the energy of a crash is absorbed by destruction of the hood or trunk of the car. Volvo also invented the easy-to-use three-point seatbelt; first introduced as an accessory in 1957 and made standard on all Volvo cars in 1959. All these safety features are now standard in all cars and are responsible for saving millions of lives.

Volvo also was the first company to produce cars with padded dashboards starting in late 1956 with their Amazon model. Additionally, Volvo developed the first rear-facing child seat in the late 1960s and introduced its own booster seat in 1978. In the mid-eighties, Volvo introduced the first central high-mounted stoplight (a brake light not shared with the rear taillights), which became federally mandated in the 1986 model year. Seatbelt and child seat innovation continued as shown in the 1991 960. The 960 introduced the first three-point seatbelt for the middle of the rear seat and a child safety cushion integrated in the middle armrest. Also in 1991 came the introduction of the Side Impact Protection System (SIPS) on the 940/960 and 850 models, which channeled the force of a side impact away from the doors and into the safety cage. In 1998, Volvo introduced its Whiplash Protection System (WHIPS), a safety device to prevent injury of front seat users during collisions. In 2004, Volvo introduced the BLIS system, which detects vehicles entering the Volvo's blind spot with a side view mirror mounted sensor and alerts the driver with a light. That year also saw Volvos sold in all markets equipped with side-marker lights and daytime-running lights (the latter having already been available in many markets for some time). Much of Volvo's safety technology now also goes into other Ford vehicles, such as the Aston Martin DB9.

By the mid-1990s there was little to distinguish Volvo from some other manufacturers (notably Renault) on safety when put through tests such as EuroNCAP as other manufacturers caught up when they realised the marketing potential of safety. The Volvo 745 had some severe problems with the C-pillar that could break in collisions even at relatively low speeds. The design was strengthened and the 740 was renamed as the Volvo 940. Also, the production of P1800 had to be stopped because it did not fulfill US safety standards. A US study showed that Volvo's safety have been slipping according to Russ Rader, a spokesman for the Insurance Institute for Highway Safety. A Volvo spokesperson denied that the company's vehicles are any less safe than the Institute's top-rated vehicles.

In the early 1970s, Volvo acquired the passenger car division of the Dutch company DAF, and marketed their small cars as Volvos before releasing the Dutch-built Volvo 340, which went on to be one of the biggest-selling cars in the UK market in the 1980s.

Volvo, as one of the largest truck manufacturers in the world, took the initiative to sell its automobile manufacturing in 1998 in order to fully focus its efforts on the market for commercial vehicles. Ford, on the other hand saw advantages in acquiring a profitable prestige mid-size European automobile manufacturer, well renowned for its safety aspects, as an addition to its Premier Automotive Group. The buyout of Volvo Cars was announced on January 28, 1998, and in the following year an acquisition was completed at a price of $6.45 billion USD.

As a result of the divestiture, the Volvo name is now utilized by two separate companies:

The Volvo™ trademark is now jointly owned (50/50) by Volvo and Ford. One of the main promotional activities for the trademark is the sailing contest Volvo Ocean Race, formerly the Whitbread Around the World Cup. There is also a Volvo Baltic Race, and Volvo likes to encourage its affluent image by sponsoring golf tournaments all over the world. 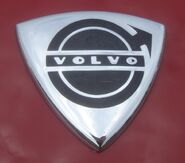 Add a photo to this gallery
Trending pages

V
Retrieved from "https://classiccars.fandom.com/wiki/Category:Volvo?oldid=18737"
Community content is available under CC-BY-SA unless otherwise noted.