The Wolseley Motor Company was a British automobile manufacturer founded in 1901. After 1935 it was incorporated into larger companies but the Wolseley name remained as an upmarket marque until 1975.

The origins of the company as an automobile brand was in about 1895–96 when 30-year-old Herbert Austin, then employed as a works manager at the Wolseley Sheep Shearing Company, became interested in engines and automobiles. During the winter of 1895–96 he made his own version of a design by Léon Bollée that he had seen in Paris. Later he found that another British group had bought the rights, therefore Austin had to come up with a design of his own. In 1897 the second Wolseley car, the Wolseley Autocar No. 1 was revealed. It was a three-wheeled design (one front, two rear) featuring independent rear suspension, mid-engine and back to back seating for two adults. It was not successful and although advertised for sale, none were sold. The third Wolseley car, the four-wheeled Wolseley "Voiturette" followed in 1899. A further four-wheeled car was made in 1900. The 1901 Wolseley Gasoline Carriage featured a steering wheel instead of a tiller. The first Wolseley cars sold to the public were based on the "Voiturette", but production did not get under way until 1901, by which time the company had changed hands. In that year the automobile division was spun off (with financing from Vickers) as an independent concern in Adderley Park, Birmingham. Austin managed the new Wolseley company for a short time before resigning to form his own concern, the Austin Motor Company, in 1905.

Wolseley purchased the Siddeley Autocar Company, with founder John Davenport Siddeley in charge. Siddeley (later Baron Kenilworth) took control of the merged concern, renaming the marque Wolseley-Siddeley until his resignation in 1910. He went on to manage the Deasy Motor Company, which became Siddeley-Deasy. This later merged with Armstrong-Whitworth to become Armstrong Siddeley. In 1912 they were commissioned by the Russian Count Peter P Schilovski, a lawyer and member of the Russian royal family, to build the Schilovski Gyrocar.

The company officially became the Wolseley Motor Company in 1914. It also began operations in Montreal and Toronto as Wolseley Motors Limited. This became British and American Motors after the First World War.

In 1918, Wolseley began a joint venture in Tokyo, with Ishikawajiama Ship Building and Engineering. The first Japanese-built Wolseley car rolled off the line in 1922. After World War II the Japan venture is reorganized, renaming itself Isuzu Motors in 1949.

In 1919 Wolseley also took over the Ward End, Birmingham munitions factory from Vickers.

Wolseley grew quickly selling upmarket cars, and even opened a lavish showroom, Wolseley House, in Piccadilly (next to the Ritz Hotel, now housing a restaurant called The Wolseley). Finances were strained however, and the company faced receivership in October, 1926 with debts of £2 million.

Wolseley was purchased personally by William Morris, 1st Viscount Nuffield for £730,000 in February 1927 using his own money. Other bidders included General Motors and the Austin Motor Company. Morris renamed the company Wolseley Motors (1927) Ltd and consolidated its production at the sprawling Ward End Works in Birmingham. In 1935, Wolseley became a subsidiary of Morris' own Morris Motor Company and the Wolseley models soon became based on Morris designs. It became part of the Nuffield Organisation along with Morris and Riley/Autovia in 1938.

After the war Morris and Wolseley production was consolidated at Cowley, and badge engineering took hold. The first post-war Wolseleys, the similar 4/50 and 6/80 models, were based on the Morris Oxford MO.

Following the merger between Austin and Nuffield that created the British Motor Corporation (BMC), Wolseleys shared with MG and Riley common bodies and chassis, namely the 4/44 (later 15/50) and 6/90, which were closely related to the MG Magnette ZA/ZB and the Riley Pathfinder/Two-point-Six respectively.

In 1957 the Wolseley 1500 was based on the planned successor to the Morris Minor, sharing a bodyshell with the Riley One-Point-Five. The next year, the Wolseley 15/60 debuted the new mid-sized BMC saloon design penned by Pinin Farina. It was followed by similar vehicles from five marques within the year.

The Wolseley Hornet was based on the Austin and Morris Mini with a booted body style which was shared with Riley as the Elf. The 1500 was replaced with the Wolseley 1100 (BMC ADO16) in 1965, which became the Wolseley 1300 two years later. Finally, a version of the Austin 1800 was launched in 1967 as the Wolseley 18/85.

After the merger of BMC and Leyland to form British Leyland in 1969 the Riley marque, long overlapping with Wolseley, was retired. Wolseley continued in diminished form with the Wolseley Six of 1972, a variant of the Austin 2200, a six-cylinder version of the Austin 1800. It was finally killed off just three years later in favour of the Wolseley variant of the wedge-shaped 18–22 series saloon, which was never even given an individual model name, being badged just "Wolseley", and sold only for seven months until that range was renamed as the Princess. This change thus spelled the end of the Wolseley marque after 80 years.

As of 2011 the Wolseley marque is owned by Nanjing Automobile Group, bought as part of the assets of the MG Rover Group. The Wolseley Sheep Shearing Company continued trading, and continues today as Wolseley plc. 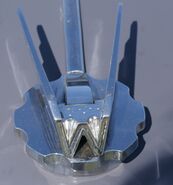 Wolseley Badge
Add a photo to this gallery
Trending pages