Start a Wiki
The Citroën Méhari is a utility car and off-roader produced by the French automaker Citroën. 144,953 Méharis were built between 1968 and 1988. A Méhari is a type of fast-running dromedary camel, which can be used for racing or transport. A Méhariste was a French Armée d'Afrique and Army of the Levant cavalryman that used these camels.

The Méhari was based on the Citroën Dyane 6, and had a body made of ABS plastic with a soft-top. It also employed the 602 cc flat twin gasoline engine shared with the 2CV6 and Citroën Ami. A four-wheel drive version of the Méhari was produced from 1980 to 1983 and had excellent off-road qualities, due to the lightness of the vehicle (the standard Méhari weighs just 570 kg (1,300 lb)) and the interconnected fully independent long-travel 2CV suspension used by all of the Citroën 'A-Series' vehicles. For a full description of the suspension, see Citroën 2CV.

The Citroën Méhari also was in service with the Irish Defence Forces and had a total of 12 machines purchased in the late 1970s, most were sold at auction about 1985, but one is retained at the DFTC in the Curragh Camp, County Kildare, Ireland.

The Méhari was sold in the United States for one year, 1970, where the vehicle was classified as a truck. As trucks had far more lenient National Highway Traffic Safety Administration safety standards than passenger cars in the US, the Méhari did not have seat belts. Only 214 Méharis were sold in 1970.

Distinctions for the US-model included: 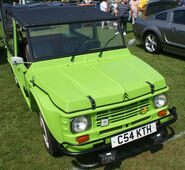 Citroën Méhari
Add a photo to this gallery
Retrieved from "https://classiccars.fandom.com/wiki/Citro%C3%ABn_M%C3%A9hari?oldid=65164"
Community content is available under CC-BY-SA unless otherwise noted.