Start a Wiki
The Ferrari 275 was a 2-seat front-engined Gran Turismo automobile produced by Ferrari between 1964 and 1968. It used a 3.3 L (3286 cc) Colombo 60° V12 engine and produced 280-300 hp. The Pininfarina-designed body was a graceful evolution of the car's predecessor, the 250, and strongly contrasted with its replacement, the Daytona. The 275 introduced Ferrari's "transaxle" concept, where the transmission and rear axle are integrated.

Motor Trend Classic named the 275 GTB/GTS as number three in their list of the ten "Greatest Ferraris of all time".

The standard 275 GTB coupe was produced by Scaglietti and was available with 3 or 6 Weber twin-choke carburettors. It was more of a pure sports car than the GT name suggested. Some cars were built with an aluminium body instead of the standard steel body. A Series Two version with a longer nose appeared in 1965.

Pininfarina built 200 275 GTS Roadsters for the American market (including 14 in right hand drive) between 1964-1966 with entirely different bodywork. It was intended to be more of a GT car and less of a sports car than its GTB brother. The 275 GTS was replaced by the 330 GTS with the switch to the four-cam engine, leaving no 3.3 L convertible in the range until the creation of the 275 GTB/4 NART Spider. The 330 engine was a two cam engine. not a 4 cam

For the 1965 racing season, 4 lightweight 275 GTB Competizione Speciales were built and equipped with 250 LM engines.

For the 1966 season, Ferrari decided to build 12 lightweight 275 GTB/C cars, they were constructed between the end of the 275 two-cam production run and the start of the 275 four-cam production run; even though they very much resembled the road-going 275 GTB, not one body panel was the same and underneath and very little of the road car remained.

Mauro Forghieri designed a special super-lightweight steel and aluminium version of the 275 GTB chassis. A regular suspension was fitted, but it was made slightly stiffer by the addition of extra springs. Scaglietti bodied the chassis with an ultra thin aluminum body; the panels were about half as thick as the ones used on the GTO and the Cobra - even leaning on the 275 GTB/C would dent the body; the entire rear section was reinforced by fiberglass to prevent it from flexing at the slightest impact. In all, this focus on saving weight made a difference of over 150 kg (331 lb) compared to the alloy bodied road cars.

Like the four 'Competizione Speciales', the 275 GTB/C was powered by the 250 LM engine. Somehow Ferrari 'forgot' to mention to the governing body that the 275 GTB had a six carburetor option, so only a three 'carb' engine could be homologated. Specifically for the 275 GTB/C, Weber constructed the 40 DF13 carburetor of which three would replace the six 38 DCNs found on the 250 LM. The rest of the drivetrain was similar to the 275 GTB, but strengthened slightly.

Two of the twelve built were sold for street use. Unlike the race cars, these street cars were fitted with alloy wheels shod with Pirelli tires. Competition cars were fitted with special Borrani wire wheels, shod with Dunlop's latest racing tires. It was this combination that would prove to be the weak spot of the 275 GTB/C; the tires had so much grip that they could overstress and break the spokes on the wheels. After the 275 GTB/C, no competition Ferrari would be fitted with wire wheels again.

Introduced at the Paris Motor Show in October 1966, the 275 GTB/4 (or 4-cam) was a substantially updated car; built by Scaglietti, it featured new bodywork and was the first Ferrari to not be offered with wire wheels.

Power came from a substantially reworked Colombo V12, still with two valves per cylinder but now with a four-cam engine and six carburettors as standard. In a departure from previous Ferrari designs, the valve angle was reduced three degrees to 54° for a more-compact head. The dual camshafts also allowed the valves to be aligned "correctly" (perpendicular to the camshaft) instead of offset as in the SOHC Ferraris. It was a dry-sump design with a huge 17 qt (16 L) capacity. The individual cylinder capacity remained unchanged at slightly under 275cc, which as before gave the model the first three digits of its name, and when multiplied by the number of cylinders equals 3,286cc total swept volume.

The transaxle was also redesigned. A torque tube connected the engine and transmission, rather than allowing them to float free on the body as before. This improved handling, noise, and vibration. Porsche synchronizers were also fitted for improved shifting and reliability.

A 275 GTB/4 N.A.R.T. Spyder version was only available from a single American dealer, Luigi Chinetti, who was not satisfied with the 275 GTB/4. He asked Sergio Scaglietti and Enzo Ferrari to build a few Spyder versions of the 275 GTB/4, which he bought for approximately $8,000 each; N.A.R.T. stood for Chinetti's North American Racing Team. In a contemporary road test, Road & Track commended the Spyder as "the most satisfying sports car in the world." 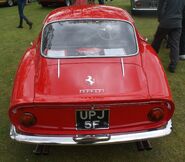 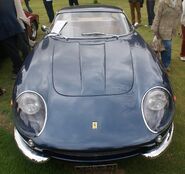 Ferrari 275 GTB/4
Add a photo to this gallery
Retrieved from "https://classiccars.fandom.com/wiki/Ferrari_275?oldid=56686"
Community content is available under CC-BY-SA unless otherwise noted.