All 330 models used an evolution of the 400 Superamerica's 4.0 L Colombo V12 engine. It was substantially changed for the 330 cars, however, with wider bore spacing and the notable use of a true alternator rather than a dynamo generator.

Socialite Sandra West is buried with her blue 330 America at the Alamo Masonic Cemetery at San Antonio, Texas.

The 250 GT/E 2+2 was replaced in January, 1964 by the new 330 GT 2+2. It was much more than a re-engined 250, however, with a sharper nose and tail, quad headlights, and a wide grille. The wheelbase was 50 mm (2.0 in) longer, but Koni adjustable shock absorbers improved handling. A dual-circuit Dunlop braking system was used with discs all around, though it separated brakes front to back rather than diagonally as on modern systems.

The 1965 Series II version featured a five-speed gearbox instead of the overdrive four-speed of the prior year. Other changes included the switch back to a dual-light instead of quad-light front clip, alloy wheels, and the addition of optional air conditioning and power steering. Prior to the introduction of the 'Series II' 330 GTs, a series of 125 'interim' cars were produced, with the 4-headlight external configuration of the Series I cars, but with the 5-speed transmission and 'suspended' foot pedals of the 'Series II' cars.

The GTC berlinetta was introduced at the Geneva Motor Show in March, 1966. It was a 2-seat coupe with a Pininfarina-designed body. A 1967 GTC was given one-off bodywork by Zagato at the behest of American importer Luigi Chinetti in 1974. This car was called the "Zagato Convertibile", since it was of a targa-style.

Four 330 Le Mans Berlinettas were built in 1963. They were essentially a development of the 250 GTOs and fitted with the 4-litre 330 engine. Although visually similar to the 250 GTOs, there are numerous body differences; these four cars are not the same as the "330 GTOs". 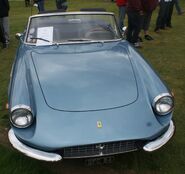 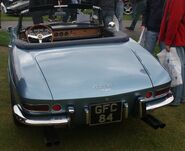 Ferrari 330 GTS
Add a photo to this gallery
Retrieved from "https://classiccars.fandom.com/wiki/Ferrari_330?oldid=68676"
Community content is available under CC-BY-SA unless otherwise noted.