Start a Wiki
The Ferrari 365 is Ferrari's large FR layout grand tourer and 2+2 line. Introduced at the 1966 Geneva Motor Show, it replaced the 330 and 500 Superfast. Featuring evolutionary Pininfarina styling, it is nevertheless often overshadowed by its famous successor, the sharp-creased 365 GTB/4 "Daytona".

The 365 GT 2+2 was a luxurious car with leather seats, power steering and brakes, electric windows, and optional air conditioning. It quickly became the company's top-selling model with about 800 produced in four years, 52 of which were right hand drive.

The 330 GTC was replaced in 1968 by the 365 GTC. It was essentially just a re-engine of the 330 GTC, with even the styling remaining almost the same. Differences were limited to non-vented front fenders and a vented hood.

Integrating the gearbox with the final drive gave the car a balanced 50:50 weight distribution. The 365 GTC retained the independent rear suspension, employing coil springs and wishbones, of its immediate predecessor, though this was a relatively recent departure for Ferrari. Stopping power came from servo-assisted disc brakes all-round with a split circuit system.

Like the 330 GTC, the 330 GTS was replaced in 1968 by the 365 GTS. Again a simple re-engine job, this Spider featured the same styling changes as the coupe. Just 20 were built before its place was assumed by the 365 GTB/4-based Daytona Spider. 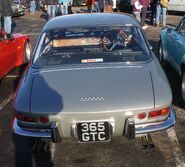 Ferrari 365 GTC
Add a photo to this gallery
Retrieved from "https://classiccars.fandom.com/wiki/Ferrari_365?oldid=42710"
Community content is available under CC-BY-SA unless otherwise noted.