With a transverse engine and gearbox in a mid-mounted, rear-wheel drive configuration, the X1/9 was noted for its excellent handling, lightweight-removable hardtop, front and rear-storage compartments — and for being designed from its conception to meet the late '60s U.S. safety regulations.

The X1/9 succeeded a 1969 show concept car called the Autobianchi A112 Runabout, with styling by Bertone under chief designer Marcello Gandini.

Designed around the all-new 128 SOHC engine and gearbox (transmission) from the front wheel drive Fiat 128, the X1/9 relocated the transverse drive train and suspension assembly from the front of the 128 to the rear of the passenger cabin, directly in front of the rear axle, giving a mid-engined layout. The layout also located the fuel tank and spare wheel side by side ahead of the engine, directly behind the seats — optimizing the proportion of the car's weight falling within its wheelbase for more effective handling and also enabling cargo areas front and rear.

Fiat began marketing a right-hand drive variant in 1976. Unlike Fiat's marketing nomenclature at the time which used a numerical system (e.g., 127, 128, 124, 131) denoting relative position in the model range, the X1/9 retained its prototype code as its marketing name. Fiat's prototype coding used X0 for engines, X1 for passenger vehicles and X2 for commercial vehicles. The X1/9 was thus the ninth passenger car developed using the nomenclature.

The prototype car featured a distinctive wedge shape and took many styling cues from contemporary power-boat design. Though the more extreme features of the Runabout such as the C pillar mounted headlights and the small wind-deflector windscreen were lost for the production car, many aesthetic features of the Autobianchi Runabout are readily identifiable on the X1/9. The long flat bonnet (hood) with central indentation, the large front overhang, the wedge shape with prominent C pillar roll-over hoop and the car-length indented plimsoll-line all made the successful transition to the X1/9, giving it a highly distinctive appearance.

Once developed for production, the two-seater featured sharp-edged styling with a wedge shape, pop-up headlights and a removable hard top roof panel (targa top). The removable hardtop stores in the front luggage compartment, below the front hood, only slightly reducing the space available for cargo. An aftermarket company offered a top made of lightweight clear-smoked polycarbonate.

The car was developed for release for European sales in 1972 to replace the 850 Spider by Bertone. It was not intended as a replacement for the 124 Sport Spider and production of the 124 Spider and X1/9 continued in parallel for much of the X1/9's life. The car's monocoque body was produced at the Bertone factory in Torino (Turin) and then transported to the Fiat's Lingotto factory for final assembly. In 1982, shortly after the introduction of the 1500 model, complete production was assumed by Bertone with models subsequently badged as the Bertone X1/9. Bertone models featured revised footwells redesigned to enhance legroom and sitting comfort for persons taller than the original design target.

The last production models were named the Gran Finale and sold over the 1989/1990 period. They were a dealer modification of the Special Edition (commonly abbreviated to SE) of 1988/1989, with the addition of a rear spoiler and Gran Finale badges.

1975-78 USA cars were unique to the US market with "ladder-style" impact absorbing bumpers front and rear. To meet USA evaporative and exhaust emission standards, X1/9's were fitted with exhaust gas recirculation valves, air pumps and an activated charcoal system. These cars were rated at 63HP.

In 1979 U.S.A. cars received an increase in displacement to 1498cc and a 5-speed transmission. 1979 USA cars retained the previous emission controls. Model years 1980 and 1981 saw a transition from carburetion to Bosch L-Jetronic fuel injection, with the changeover coming in 1980 for cars sold in California and a gradual changeover for "federal" cars from late 1980 to 1981 model years. The combination of Fuel Injection (FI), a catalytic converter and unleaded gasoline allowed these cars to meet California and later federal emission standards. FI cars were rated at 75HP.

In 1979 U.S.A. X1/9s also received both exterior and interior revisions including integrated bumpers front and rear, as well as a new front grille and airdam. The instrument panel and dash redesign moved the heating and ventilation controls from the center console up to the main dash, relocated the radio into the center dash area, moved the fuse panel from the area above the driver's left knee to the area above the passenger's footwell where the glovebox was, and moved the glovebox atop the dash.

During 1982, Fiat ended its presence in the U.S.A. Fiat turned over marketing and support of the X1/9 to International Automobile Importers, Inc., headed up by Malcolm Bricklin, and turned over full production duties to Bertone. 1983 was a transition year for the orphaned X1/9, which thereafter was sold as the "Bertone X1/9." IAI and Bertone continued to update the X1/9, such as providing rust protection, revised seating to accommodate taller drivers, and a modernized electrical system for 1984 models.

The Filipinetti X1/9 of Scuderia Filipinetti was presented first at the Geneva Motor Show on 15/3/1973- 25/3/1973 as the first Fiat X1/9 race car. It was built in coorporation with Fiat by the technician and racer Mike Parkes who later developed and built the Lancia Stratos. The Filipinetti had a 1290 cc engine with Lucas mechanical fuel injection. The power was about 160 hp (119 kW) at 8600 rpm with a top speed of 210 km/h (130 mph).

The Fiat subsidiary Abarth, in 1973, developed the Abarth X1/9 Prototipo to replace the 124 Spider Abarth as Fiat's main rally car. Ultimately, the parallel 131 Abarth project was chosen over the X1/9 as the main rally competition platform.

The X1/9 Prototipo used an 1840 cc engine (a bored 1600 cc 124 derived unit) with a custom 16v cylinder head fed by twin 44 mm Weber IDF carburettors. Externally the cars sported flared wheel-arches, a small "duck tail" spoiler and an F1 style air intake designed to feed the carburettors cool air from above the cars roof. All the X1/9 Prototipos were raced in the traditional Abarth lime-green/yellow and orange/pink colour scheme.

The prototype nature of the X1/9 Prototipo project means that the exact number of cars produced is impossible to define. Components and entire body-shells were routinely swapped and replaced as part of the development process, but it is believed that 5 genuine cars were produced.

In 1975 the X1/9 was chosen by Dallara to enter the World Championship for Makes (in the Group 5 Special Production class). The car featured a modified X1/9 engine with a custom 16v cylinder-head and fundamental suspension and body/monocoque alterations, the most obvious of which are the massively flared wheel-arches and the over-sized rear wing.

The Faran Car Co. Ltd. was a U.K based company that offered both D-I-Y kit and in-house assembled options for their Eliminator kit. The design featured replacement fibreglass moldings for the front and rear wings, together with front and rear integrated bumper sections. The external modifications were completed by side sill skirts and a rear boot spoiler which was not dissimilar in style to that found on a De Tomaso Pantera. Faran also offered conversions using Lancia or Fiat Twin Cam engine units, although some owners opted to keep the original SOHC setup. Production of the Faran kits ended following an unfortunate factory fire.

Eurosport (UK) Ltd. is an X1/9 parts specialist that produced two kit variants commonly referred to as the full and bolt-on kits. The full kit was a contender to the Faran version and utilises wide replacement fibreglass moldings for the front and rear wings, together with front and rear integrated bumper sections. Side skirts completed the styling which featured Ferrari Testarossa style side air intake mouldings ahead of the rear wheels. The bolt-on kit in contrast featured replacement front and rear integrated bumper sections that were moulded to blend with the standard wings. This allowed the 1500 alloy bumpers to be substituted with ease and offer a more modern appearance. Side sill skirts were also included in the bolt-on kit. Both kits are still available today.

The Schult X1/9 kit was produced in Germany and could again be likened to have take some inspiration from the Testarossa style, but with more angular lines. Current availability for the Schult conversion is unknown.

Paint codes for Mica Red (408) and Mica Blue (407) (1988 to 1989) are not listed in Fiat paint catalogues (they are Bertone colours) but are listed in Volvo paint catalogues. The colours used on the contemporary Volvo 780 are identical to those used on the X1/9 (even using the same 408/407 codes) as the two cars were produced, and painted, by Bertone in the same factory at the same time. 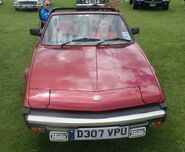