The Ford Consul Corsair, manufactured by Ford Motor Company in the United Kingdom, was a midsize car introduced at the London Motor Show in October 1963 and available as either a saloon or estate from 1964 until 1970, (The early model had styling cues from the 61/62 Ford Thunderbird.) There was also a convertible version built by Crayford, which is now very rare and highly sought after as a classic.

Two-door Corsair saloons are also rare, being only briefly available in the UK, although two-door production continued for some export markets. Ford Corsair V4 estate 1966. The stylish Corsair estate conversion was produced by Abbott. It was more expensive than most permutations of the Cortina estate but offered no more load carrying capability. It was never a big seller.The Corsair was one of the four model Consul range, and shared many of its mechanical components with the Cortina, Classic and Capri. The Corsair had unusual and quite bold styling for its day, with a sharp horizontal V-shaped crease at the very front of the car into which round headlights were inset. This gave the car an apparently aerodynamic shape. The jet-like styling extended to the rear where sharply pointed vertical light clusters hinted at fins. The overall styling was clearly inspired by the early 1960s Ford Thunderbird, though in transferring the look to a British family car, the overall effect is something of an acquired taste. This American styling cue was also used, by Ford, in Germany, on the Ford Taunus P3.

Ford Corsair V4 2-door convertible 1967. The Corsair convertible was a product of Crayford Auto Developments which was first exhibited at the London Motor Show in October 1966 With the vinyl roofed Corsair 2000E Ford attempted to compete on price half a class up in the category dominated (in the UK) by the Rover 2000 and Triumph 2000.The car was initially offered with the larger 60 bhp (45 kW), single carburettor, 1.5 L Kent engine that was also used in the smaller Ford Cortina, in standard and GT form. In 1964 twins Tony and Michael Brookes' team in a Kent engined (straight four) Corsair GT set 13 World Speed records at Monza in Italy averaging over 100 mph (160 km/h) for 15,000 miles (24,000 km) in the under 1500 cc class. The range was revised in 1965, adopting new Ford Essex V4 engines that many say spoiled rather than enhanced the car, as it had an out of balance couple, making it rough at idle and coarse on the road.

This engine was available in 1663 cc form at first, but later in 1966, a larger 2.0 litre L version was offered alongside. One marketing tag line for the V4 models was "The Car That Is Seen But Not Heard", which was a real stretch of the ad man's puff, given the inherent characteristics of the engine. The other tag was "I've got a V in my bonnet".

An estate car by Abbott was added to the range on the eve of the Geneva Motor Show in March 1966 and in 1967, the Corsair also underwent the Executive treatment like its smaller Cortina sibling, giving the 2000E model with dechromed flanks, which necessitated non styled-in door handles, special wheel trims, reversing lights, a vinyl roof and upgraded cabin fittings. The 2000E, priced at £1,008 in 1967, was positioned as a cut price alternative to the Rover 2000, the introduction of which had effectively defined a new market segment for four cylinder executive sedans in the UK three years earlier: the Corsair 2000E comfortably undercut the £1,357 Rover 2000 and, indeed, the less ambitiously priced Humber Sceptre then retailing at an advertised £1,047.

The Corsair's performance was underwhelming, with a top speed in its 2.0 L V4 version of about 95 mph (153 km/h), not much faster than the original 1500GT version of 1964. While enthusiasts sought increased performance, a popular story circulated that if the car were driven at speeds over 80 mph (129 km/h), its wedge-shaped nose would generate sufficient lift to make the vehicle dangerously unstable. It is more than likely this story is an urban myth. Indeed, the myth was seemingly laid to rest when Corsair set World records at Monza (see above), running at 110 mph (180 km/h) for hour upon hour without the slightest apparent effect.

The Corsair was replaced by the Mk 3 Cortina in 1970, at which time the enlarged Cortina became Ford's midsized car, and a new smaller model, the Escort filled in the size below. The new Ford Capri took on the performance and sporty aspirations of the company.

Over its six-year production, 310,000 Corsairs were built.

1989-1992 Ford Corsair (UA) GL sedan.Between 1989 and 1992, the Corsair name was used by Ford in Australia for a restyled version of the Nissan Pintara (known in development as 'Project Matilda'), under a model-sharing scheme known as the Button Plan. Available as a sedan or hatchback, it was intended to replace the Mazda 626-based Ford Telstar, which was imported from Japan. The two were sold side-by-side in the Ford range for a few years, with the Telstar only available as the high-performance TX5 hatchback. When Nissan closed its Australian plant in 1992, the Corsair was dropped and the imported Telstar once again became Ford's offering in the medium size segment, until being replaced by the Mondeo in 1995. The Corsair was available in a 2.0L model (CA20E) and a 2.4L model (KA24E) in GL and Ghia forms.

In 1958 and 1959 Ford in USA named one of their cars in the Ford Edsel Series for Corsair. 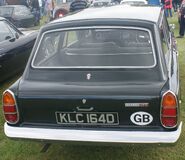 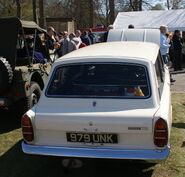 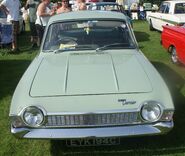 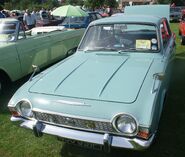 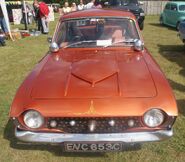 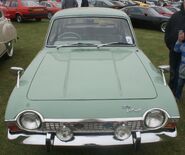 Ford Corsair
Add a photo to this gallery

Retrieved from "https://classiccars.fandom.com/wiki/Ford_Corsair?oldid=58027"
Community content is available under CC-BY-SA unless otherwise noted.