The Model 48 was an update on Ford's V8-powered Model 40A, the company's main product. Introduced in 1935, the Model 48 was given a cosmetic refresh annually, begetting the 1937 Ford before being thoroughly redesigned for 1941. The 1935 Ford's combination of price, practicality, and looks vaulted the company ahead of rival Chevrolet for the sales crown that year, with 820,000 sold.

The 1935 Ford was a thorough refresh on the popular V8-powered Ford. The four-cylinder Model A engine was no longer offered, leaving just the 221 CID (3.6 L) V8 to power every Ford car and truck. The transverse leaf spring suspension remained, but the front spring was relocated ahead of the axle to allow more interior volume. The body was lowered and new "Center-Poise" seating improved comfort.

Visually, the 1935 Ford was much more modern with the grille pushed forward and made more prominent by de-emphasized and more-integrated fenders. A major advance was a true integrated trunk on "trunkback" sedans, though the traditional "flatback" was also offered. Outdated body styles like the Victoria were also deleted for the year.

Two trim lines were offered, standard and DeLuxe, across a number of body styles including a base roadster, five-window coupe, three-window coupe, Tudor and Fordor sedans in flatback or trunkback versions, a convertible sedan, a woody station wagon, and new Model 51 truck. Rumble seats were optional on coupe model. An oil pressure gauge($4) and two windshield wipers were optional. If one got the optional radio, it replaced the ash tray.

Chevrolet regained the sales lead at the end of 1936, but the Ford still sold extremely well. A new club cabriolet model was introduced with a fully framed windshield and weatherproof top, and the convertible sedan gained the popular integrated trunkback design.

The look was updated with an inverted pentagonal grille with all-vertical bars beneath a prominent hood and three horizontal chrome side strips (on DeLuxe models). A concealed horn, long a prominent part of the Ford's design, also brought the car into modern times. The new trucks continued with the old grille. Other major changes for 1936 were the use of pressed steel "artillery" solid wheels instead of wire wheels. 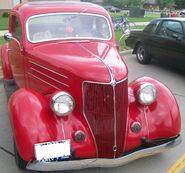 1936 Ford Model 48
Add a photo to this gallery
Retrieved from "https://classiccars.fandom.com/wiki/Ford_Model_48?oldid=60075"
Community content is available under CC-BY-SA unless otherwise noted.