The Ford Transit is a range of panel vans, minibuses, and pickup trucks, produced by the Ford Motor Company in Europe.

The Transit has been the best-selling light commercial vehicle in Europe for 40 years, and in some countries the term "Transit" has passed into common usage as a generic term applying to any light commercial van in the Transit's size bracket.

Although the Transit name has been in use by Ford since 1953, the first definitive Transit platform was launched in 1965. Since then, six million Transits have been produced across three basic platforms (debuting in 1965, 1986 and 2001, respectively), with several "facelift" versions of each. The six millionth van was built in March 2010.

Unlike the British-built Transit "family", the first production Ford to wear the "Transit" badge was a van built in Ford's Köln (Cologne) plant in Germany. It was introduced in 1953 as FK 1000 (Ford Köln carrying 1,000 kg). From 1961, this vehicle was called the Ford Taunus Transit. Production of this model ceased in 1965.

The German vehicle was not widely exported, and the "Mark 1" tag has commonly been applied, retroactively, to the 1965 to 1978 British model (see below). Whilst there have been three basic Transit platforms since 1965, the various facelifts and upgrades over the years have been referred to using a conflicting range of "Mark" numbers, with some sources counting a facelift as a new "Mark", some not. Ford's own historical look back at Transit production, published for the launch of the 1994 model, avoids the issue by referring to generations of Transit by years produced. This article attempts to make mention of all the common naming systems.

The first Ford Transit proper was introduced in October 1965, and has been in continuous production in three basic generations to the present day. The van was produced initially at Ford's Langley facility in Berkshire, England (a former Second World War aircraft factory which had produced Hawker Hurricane fighters), but demand outstripped the capability of the plant, and production was moved to Southampton, where it has remained. Transits have also been produced in Ford's Genk factory in Belgium and also Turkey. Transits have been produced in Amsterdam for the local market from the mid seventies until the end of 1981. This factory had ample capacity, since the Ford Transcontinental produced there had little success (total production 8000 in 6 years). Although the Transit sold well in the Netherlands, it was not enough to save the factory, which closed in December 1981. The Transit is also produced in China for the Chinese market.

The Transit was introduced to replace the Ford Thames 400E, a small mid-engined forward control van noted for its narrow track which was in competition with similar-looking but larger vehicles from the BMC J4 and J2 vans and Rootes Group's Commer PB ranges. In a UK market segment then dominated by the Bedford CA, Ford's Thames competitor, because of its restricted load area, failed to attract fleet users in sufficient numbers. Ford switched to a front engined configuration, as did the 1950s by Bedford with their well-regarded CA series vans. Henry Ford II's revolutionary step was to combine the engineering efforts of Ford of Britain and Ford of Germany to create a prototype for the Ford of Europe of today—previously the two subsidiaries had avoided competing in one another's domestic markets but had been direct competitors in other European markets.

The Transit was a departure from the European commercial vehicles of the day with its American-inspired styling—its broad track gave it a huge advantage in carrying capacity over comparable vehicles of the day. Most of the Transit's mechanical components were adapted from Ford's car range of the time. Another key to the Transit's success was the sheer number of different body styles: panel vans in long and short wheelbase forms, pick-up truck, minibuses, crew-cabs to name but a few.

The engines used in the UK were the Essex V4 for the petrol engined version in 1.7 L and 2.0 L capacities. By using relatively short V-4 engines Ford were able to minimise the additional length necessitated to place the engine ahead of the driver. Another popular development under the bonnet was the equipping of the van with an alternator at time when the UK market competitors expected buyers to be content with a dynamo. A 43 bhp (32 kW) diesel engine sourced from Perkins was also offered. As this engine was too long to fit under the Transit's stubby nose, the diesel version featured a longer bonnet. The underpowered Perkins proved unpopular, and was replaced by Ford's own "York" unit in 1974. For mainland Europe the Transit had the German Ford Taunus V4 engine in Cologne 1.7 or Essex 2.0 litre versions. The diesel version's long nose front was also used to accommodate the Ford 3.0 litre V6 in vans supplied to police and ambulance services. In Australia, the long-nose diesel front was used to accommodate an inline 6-cylinder engine derived from the Ford Falcon.

According to the show Top Gear, British police have reported that in the 1970s 95% of all robberies in which the criminals used a vehicle, involved this type of Ford Transit.

The adoption of live axles front and rear in place of a system incorporating independent front suspension that had featured on its UK predecessor might have been seen as a backward step by some, but on the road commentators felt that the Transit's wider track and longer wheelbase more than compensated for the apparent step backwards represented by Ford's suspension choices. Drivers appreciated the elimination of the excessive noise, smell and cabin heat that resulted from placing the driver above or adjacent to the engine compartment in the Thames 400E and other forward control light vans of the 1950s and early 1960s. 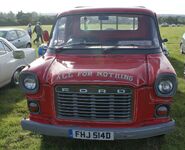 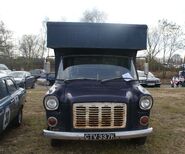 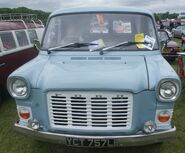 First Generation Ford Transit
Add a photo to this gallery

In March 1978, a facelifted version—commonly known in some markets as the "Mark 2" model—debuted with a restyled nose section, new interior, and the introduction of the Pinto engine from the Cortina in place of the Essex V4. Many fleet owners experienced premature camshaft wear in early Pinto units in the Cortina and for two years the Transit 75 was available with the 1.6 L Ford Kent "Xflo" engine. High performance versions intended for police or ambulance use used the 3.0 L V6 version of the Essex engine, Australian variants had 4.1 L (250 cu in) inline 6 cylinder engines In 1984, the York diesel engine was redesigned into the 2.5 L "DI" (direct injection) unit. At this time this generation received a minor facelift including a grey plastic front grille with integrated headlamp surrounds, wrap around indicators, longer bumper end caps and multifunction rear lights incorporating fog, indicator, reversing and side lights for the panel van. This facelift did not commonly result in a new "Mark" number.

The Mark II was available in 6 body styles: Van, Kombi, Chassis Cab, Parcel Van, Bus and Crewbus all available in short (2690mm) and long (3000mm) wheelbase versions. A selection of 5 engines were available: 1.6ltr OHC Petrol, 1.6ltr OHV Petrol (Kent), 2.0ltr OHC Petrol, 2.0ltr OHC Petrol (Economy) and 2.4ltr Diesel. On top of this were 32 door combinations, 6 axle ratios and options for 12 - 17 interior seats. All of these available in any combination when purchased with Ford's highly customizable custom plan. At the time this gave the business sector an unprecedented amount of flexibility which was a major factor in the vehicles ultimate success. 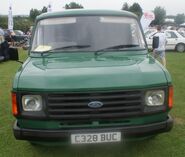 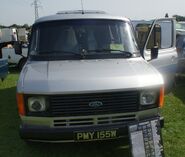 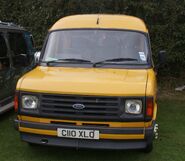 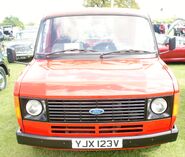 Second Generation Ford Transit
Add a photo to this gallery

Ford Transit 1986-1994The second generation Transit platform appeared in January 1986 and was notable for its all-new bodyshell which was of "one-box" design (i.e. the windscreen and bonnet are at the same angle), and the front suspension was changed to a fully independent configuration on SWB versions. The engine range was carried over largely unchanged from the last of the 1978-85 generation models, although in 1989 the high performance 3.0 V6 petrol was replaced by the Cologne 2.9 EFI V6. A subtle facelift in 1992 saw the fully independent front suspension adopted across the range, whilst a redesigned floor plan allowed the use of single, rather than paired, rear wheels on the LWB derivative, further increasing payload—these models are identifiable by the slightly more rounded front headlamps.

This generation of Transit was used by Jeremy Clarkson in Top Gear's Man With Van Challenge, finishing second (vs a tiny Suzuki Super Carry and huge LDV Convoy). This involved buying a van for under £1000, and several tests representing (stereo)typical van use: a quarter-mile drag race (cross-city speed); loading, carrying, and disgorging a load of furniture (space, access); tailgating (visibility, control); replacing a "damaged" door (maintenance); a police chase (handling), etc. The Transit upheld its reputation for agility by performing particularly well in the final chase, "resisting arrest" much longer than the slow LDV and unstable Suzuki, which overturned at the first curve.

A number of promotional Supervans were built, combining the outline and appearance of the Transit with the chassis and performance of a sports racing car.

A Mark 6 Ford Transit was used in a segment on BBC's Top Gear TV show. The show was broadcast on 10 July 2005. In the segment, Sabine Schmitz drove the Transit around the Nurburgring to see if she could beat presenter Jeremy Clarkson's time in a Jaguar S-Type Diesel of 9 minutes 59 seconds. However, her best time was 10 minutes 8 seconds despite reducing the weight of the van.

A modified Mark 3 Transit was also used in Top Gear Australia's Ashes Special and Top Gear series 16 episode 2, where Richard Hammond (UK) raced the van against a Holden VE Ute driven by Shane Jacobson (Australia) in a drag race. Unknown to Hammond and the Australians, the van was actually a turbocharged Jaguar XJ220, and only had the shell of a Transit on top.

Retrieved from "https://classiccars.fandom.com/wiki/Ford_Transit?oldid=61439"
Community content is available under CC-BY-SA unless otherwise noted.