Start a Wiki
Goldfinger is the third spy film in the James Bond series and the third to star Sean Connery as the fictional MI6 agent James Bond. Released in 1964, it is based on the novel of the same name by Ian Fleming. The film also stars Honor Blackman as Bond girl Pussy Galore and Gert Fröbe as the title character Auric Goldfinger, along with Shirley Eaton as famous Bond girl Jill Masterson. Goldfinger was produced by Albert R. Broccoli and Harry Saltzman and was the first of four Bond films directed by Guy Hamilton.

The film's plot has Bond investigating gold smuggling by gold magnate Auric Goldfinger and eventually uncovering Goldfinger's plans to attack the United States Bullion Depository at Fort Knox. Goldfinger was the first Bond blockbuster, with a budget equal to that of the two preceding films combined. Principal photography occurred from January to July 1964 in the United Kingdom, Switzerland and the American states of Kentucky and Florida.

The release of the film led to a number of promotional licensed tie-in items, including a toy Aston Martin DB5 car from Corgi Toys which became the biggest selling toy of 1964. The promotion also included an image of gold-painted Shirley Eaton as Jill Masterson on the cover of Life.

Many of the elements introduced in the film appeared in many of the later James Bond films, such as a pop star singing the theme song, the extensive use of technology and "gadgets" by Bond and an extensive pre-credits sequence that was not a major part of the main storyline. Goldfinger was the first Bond film to win an Academy Award and opened to largely favourable critical reception. The film was a financial success, recouping its budget in just two weeks and is hailed as the series' quintessential episode, still being acclaimed as one of the best films in the entire Bond canon. 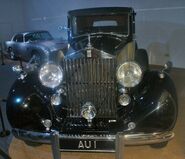 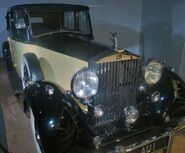 Auric Goldfinger's Rolls-Royce Phantom III
Add a photo to this gallery
Retrieved from "https://classiccars.fandom.com/wiki/Goldfinger?oldid=22600"
Community content is available under CC-BY-SA unless otherwise noted.