Start a Wiki
The Hillman Super Minx was a motor car from the British Rootes Group. It was a slightly larger version of the Hillman Minx, from the period when the long-running Minx nameplate was applied to the "Audax" series of designs. (The Minx underwent many changes throughout its history.)

Announced in October 1961, the Super Minx gave Rootes, and particularly its Hillman marque, an expanded presence in the upper reaches of the family car market. It has been suggested that the Super Minx design was originally intended to replace, and not merely to supplement, the standard Minx, but was found to be too big for that purpose. An estate car joined the range in May 1962, and a two door convertible in June 1962. The convertible never sold in significant numbers: the last one was made in June 1964, ahead of the introduction, in September 1964, of the Super Minx series 3.

The car was powered by the existing Rootes 1,592 cc unit which had first appeared late in 1953 with a 1,390 cc capacity. The original Super Minx had the cast-iron cylinder head version of the engine, though on later cars the cylinder head was replaced with an aluminium one.

Suspension was independent at the front using coil springs with anti roll bar and at the rear had leaf springs and a live axle. Un-assisted 9 in (229 mm) Lockheed drum brakes were fitted. The steering used a recirculating ball system and was as usual at the time not power assisted. Standard seating, trimmed in Vynide, used a bench type at the front with individual seats as an option. A heater was fitted but a radio remained optional. The car could be ordered in single colour or two tone paint. The four speed manual transmission featured synchromesh on the top three ratios from the start and had a floor lever: "Smiths Easidrive" automatic transmission was option.

A year after the car was launched a Series 2 version was presented, in October 1962, with greasing points eliminated, larger front disc brakes and a revised axle ratio. For buyers of the automatic transmission cars, 1962 was the year that the Smiths Easidrive option was replaced by the Borg-Warner 35 transmission.

In 1964, with the launch of the Super Minx series 3 the Super Minx was facelifted, and the wrap-around rear window gave way to a new "six-light" design with extra side windows aft of the rear side doors.

The first Super Minxes featured the 1592 cc engine as used in the Hillman Minx, providing in this application a claimed 62 bhp (46 kW; 63 PS) of power. Engine capacity was increased to 1725 cc for the Super Minx series 4 launched at the London Motor Show in October 1965. (The larger engine outlived the Super Minx, to be used in later models too.) 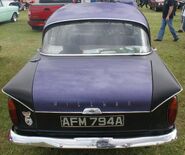 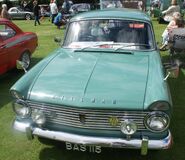 Singer Vogue
Add a photo to this gallery
Retrieved from "https://classiccars.fandom.com/wiki/Hillman_Super_Minx?oldid=25643"
Community content is available under CC-BY-SA unless otherwise noted.