The Honda N360 is a kei car, designed and built by Honda and produced from March 1967 through 1970, while its larger N600 brother lasted three more years. After a January 1970 facelift, the N360 became the NIII360 and continued in production until 1972. The car featured front wheel drive and an air-cooled 354 cc, 31 hp (23 kW) 2-cylinder engine also used in the Honda Vamos, with a beam axle/leaf spring rear suspension. The "N" prefix stands for the Japanese word "norimono" which means "vehicle" in English.

A 2-door sedan was the original body style, with a 2-door wagon called the LN360 coming in June of the first year. An upgraded 36 hp (27 kW) engine was added in October 1968 for the N360 T. A 402 cc engine was used in the similar N400. The Hondamatic-equipped N360AT which appeared in August 1968 was the first kei car equipped with an automatic transmission.

The N600 was introduced to the USA in 1969 as a 1970 model, and was the first Honda automobile to be officially imported to the United States. It was technologically advanced for its time, with an all alloy engine that could achieve 9000 rpm. Engine output was 36–45 hp (27–34 kW) and the N600 was capable of 81 mph (130 km/h). It delivered surprisingly peppy performance because of its light weight (around 550 kg/1100 pounds), due to compact dimensions and some plastic parts (like the boot lid). The first brakes were very weak, despite having front discs and servo assistance. Rear suspension was a dead axle on leaf springs. The N600 (along with the TN360 trucklet), were the first Honda cars to be assembled outside of Japan, with production in Taiwan by local joint venture Sanyang Industrial beginning in 1969. The N600 was called the Fu Gui, meaning 'Wealth' in Chinese (富貴).

US sales stopped in 1972, as for the sportier Honda Z600 (or Z, depending on country), after about 25,000 had been sold there. The first generation Honda Civic replaced these little cars with something a little more suited to the American Interstate system. 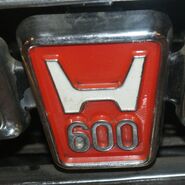 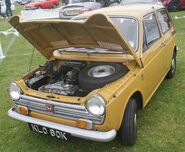 Honda N600
Add a photo to this gallery
Retrieved from "https://classiccars.fandom.com/wiki/Honda_N360?oldid=63114"
Community content is available under CC-BY-SA unless otherwise noted.