The Jaguar Mark IX or Mark nine, is large luxury saloon car produced by Automobile company Jaguar between 1959 and 1961. Its succesor, is the Mark X or 10.

The standard transmission was a four-speed manual with an overdrive system, even though most cars at that time period had a 3-speed automatic.

Its engine was an enlarged-bore 3.8 L (Liter) or 231 in, 220 bhp (Brake horsepower) DOHC straight-6. It had Dunlop disc-brakes and recirculating power steering which was now standard for it. Two SU carburettors were fitted.

The body was generally similar to its predecessor, but the sunshine roof became a standard fitting for the UK market. The interior was in the same luxurious mode with extensive use of leather, walnut wood trim and deep pile carpet. A range of single and duo-tone paint schemes was offered.

The Mark IX's power and good brakes for a vehicle of the era, together with its undoubtedly impressive aesthethic appearance makes it quite a common choice for classic car circuit racing, such as at the Goodwood Circuit's Revival meetings. 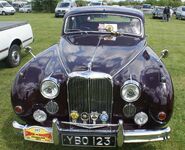 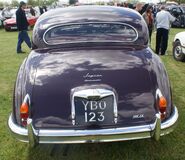 Jaguar Mark IX
Add a photo to this gallery
Retrieved from "https://classiccars.fandom.com/wiki/Jaguar_Mark_IX?oldid=60800"
Community content is available under CC-BY-SA unless otherwise noted.