Start a Wiki
The Jaguar XJ (XJ40) is a luxury sedan manufactured by Jaguar Cars between 1986 and 1994. It was an all-new redesign of the XJ to replace the Series III, although the two model ranges were sold concurrently until the Series III was discontinued in 1992. The XJ40 used the Jaguar independent rear suspension arrangement, and featured a number of technological enhancements (such as electronic instrumentation).

The 1993 XJ6 earned the title of "Safest Car in Britain" as the result of a government survey. When the XJ40 was discontinued in 1994, it was followed by the X300 platform XJ.

Throughout the 1970s Jaguar had been developing "Project XJ40", which was an all-new model intended to replace the original XJ6. Scale models were being built as early as 1972. Due to the 1973 oil crisis and problems at parent company British Leyland, the car was continually delayed. Proposals from both Jaguar's in-house designers and Pininfarina were received. Eventually, it was decided an internal design would be carried through to production, and, in February 1981, the British Leyland board approved ₤80 million to produce the new car. However, by the launch, over ₤200 million had been invested. During development, the XJ40 pioneered significant improvements to the way Jaguar designed, built, and assembled cars. Among these improvements was a 25% reduction in the number of bodywork panels required per car (e.g. three pressings needed for Series 3 door compared with one pressing for XJ40 door), resulting in not only a more efficient assembly process, but also a weight saving and a stiffier structure. Greater attention to panel gaps improved the drag factor (reduced from 0.849 Cd to 0.762 Cd), while also improving the fuel economy and lowering wind noise inside the cabin.

During the development of the XJ40, British Leyland had considered providing the Rover V8 engine for the car, which would have eliminated the need for future Jaguar engine production. The XJ40 bodyshell was allegedly engineered to prevent fitting V-configuration engines such as the Rover V8; this delayed the introduction of the V12-powered XJ12 until 1993.

The automatic transmission selector was redesigned to allow the manual selection of forward gears without accidentally selecting neutral or reverse. This new feature was dubbed the "J-Gate" and has carried over to more recent Jaguar models.

The curvaceous lines of the outgoing Series XJ were replaced by the more angular, geometric shape of the XJ40. The nose of the car would accommodate either matched pairs of round headlights, or rectangular single units; the latter were fitted to the higher-specification Sovereign and Daimler trim levels, and also to all cars for the US market.

The bumper is a visually distinct black-rubber-covered bar that runs the full width of the car and incorporates the sidelights and indicator lights. The bonnet is hinged at the front. Window frames are either chromed or black, depending on model. Rain gutters, door mirrors, and door handles are also finished in chrome. All XJ40s have a chrome surround for the windscreen and a single windscreen wiper.

Early low-specification cars were fitted with metric-sized steel wheels and plastic wheelcovers. From 1991, the wheels were changed to non-metric sizing.

The interior of the XJ40 was trimmed with either walnut or rosewood, and either cloth or leather upholstery (depending on model.)

Until 1990, cars were fitted with an instrument binnacle that used digital readouts. Instrumentation included a display named the "Vehicle Condition Monitor" (VCM), which contained a 32x32 dot-matrix screen capable of 34 functions. The VCM was able to alert the driver of bulb failure, brake pad wear, unlatched doors/boot, and low coolant level. From 1990 on, the binnacle was redesigned to use analog gauges.

Early cars used a two-spoke steering wheel that was later changed for a four-spoke airbag-equipped wheel. The glovebox was removed on later cars because of the space occupied when the passenger-side airbag was introduced. Some XJ40s bound for the United States were fitted with automatic seat belts.

The Sovereign model came equipped with significantly more features than the base XJ6. Included was air conditioning, headlamp washers, a six-speaker sound system, rear adjustable suspension, and ABS. The headlamps fitted were the rectangular single units. The window frames were chrome-plated.

Late in the XJ40 run, in 1993, Jaguar introduced the Sport model. It was available only with the six-cylinder engine, and featured rosewood interior trim (as opposed to the walnut trim of other models.) Both the door mirrors and radiator grill vanes were color-keyed to the body, which was decorated with twin coachlines. Wider-profile tires were fitted, mounted on five-spoke alloy wheels.

A long-wheelbase model named the "Majestic" was introduced in 1994, although it was only available as a special order from Jaguar. There was also a limited edition (527 built) version on the regular wheelbase for the US market in 1990, called the "Vanden Plas Majestic". These cars featured special equipment and were all finished in Regency Red, except one example in black which was kept in the United Kingdom for the Prime Minister. A Majestic can be identified by the fourth letter of its VIN, which should be an "M".

The Gold model was introduced in 1994 with a limited set of features and options, and for a modest price. It was available in fewer exterior colors than other models, and was identified by a gold-plated badge on the boot and gold growler badge at the top of the radiator grille. Gold cars were fitted with the "Kiwi" style wheels and painted with twin coachlines.

The XJR, introduced in 1988, was a high-performance model that was finished by the Oxfordshire-based JaguarSport company, a dual venture by Jaguar and race team TWR, at TWRs Kidlington-based factory alongside the XJ220. Based upon a Sovereign model, it was fitted with uprated suspension with unique Bilstein dampers, a revised power steering valve to increase the steering weight by 40% and special exterior paint and exterior styling touches. Early examples were fitted with a 3.6 AJ6 engine in standard tune but later models had a TWR tuned version of the 4.0 AJ6, with new inlet manifolds, uprated cams and a tweaked ECU. Some examples are also fitted with a larger bore JaguarSport exhaust system.

The XJR differed cosmetically from other XJ40 models with its body coloured bodykit, consisting of new front and rear valances and side skirts, all from fiberglass, a black grill with a JaguarSport badge in it and unique Speedline alloy wheels with wider tyres. Later models had ducting fitted to the front valance to feed cool air directly to the brake discs. The interior featured a leather MOMO steering wheel, JaguarSport logos on the dial faces, leather shift knob, and seat headrests embossed with the JaguarSport logo.

The appearance of the car changed numerous times from its introduction in 1988 until it ceased production in 1994, particularly with the introduction of the 4.0 engine for the 91MY when it switched to the square headlights of the Sovereign model. Only a few hundred of each variation were produced, making the cars rare today.

Given the model code "XJ81", the XJ40-based XJ12 was introduced in 1993 and powered by a 6.0L version of Jaguar's V12 engine. It could be identified by the "XJ12" badge on the rear and a "V12" emblem on the glovebox. The XJ12 used the two twin-headlamp pairs, black radiator grille vanes, and a gold "growler" badge on the radiator grille top. Early cars used chrome-plated window frames; on later cars, these were changed to black.Daimler / Vanden Plas The Daimler-branded cars represented the highest trim level, and were sold as the "Vanden Plas" model (still under the Jaguar name) in other markets such as the United States. Like the Sovereign, it was fitted with the single rectangular headlamps. Cosmetically, it differed from other models with its fluted radiator grille surround and boot-lid plinth.

The Daimler-branded cars represented the highest trim level, and were sold as their Vanden Plas model by Jaguar dealers in the United States. Like the Sovereign, it was fitted with the single rectangular headlamps. Cosmetically, it differed from other models with its fluted radiator grille surround, boot-lid plinth and detail finishes. 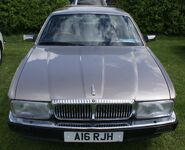 Daimler XJ40
Add a photo to this gallery
Retrieved from "https://classiccars.fandom.com/wiki/Jaguar_XJ_(XJ40)?oldid=57230"
Community content is available under CC-BY-SA unless otherwise noted.