Start a Wiki
The Jaguar XK150 was a sports car produced by Jaguar Cars between 1957 and 1961. It replaced the previous Jaguar XK140.

Initially it was available in Fixed Head Coupe (FHC) and Drop Head Coupe (DHC) versions. The Open Two Seater (OTS) Roadster model was not launched until 1958. Token rear seats were fitted in the coupes.

Although having a family resemblance to the XK120 and XK140, the XK150 was radically modernised. For the first time a one piece windscreen was used and the wing line no longer dropped as much over the doors. The bonnet was widened and opened down to the wings and on the OTS the bulkhead was moved back to make it about 4 inches longer. The car was available at various times in Red, Pearl Grey, White, Indigo Blue, Claret, Cotswold Blue, Black, Mist Grey, Sherwood Green, Carmen Red, British racing Green, Cornish grey and Imperial Maroon.

Inside the car the walnut dashboard went, to be replaced by one trimmed in leather. The doors were thinner giving more interior space.

The standard engine, the same as fitted to the XK140, was the 3.4 litre DOHC Jaguar straight-6 rated at 180 bhp at 5750 rpm but most cars were fitted with the SE engine that had a modified cylinder head with larger exhaust valves rated at 210 bhp at 5500 rpm. Twin 1.75 inch SU HD6 carburettors were fitted. In 1958 the S model was launched with three 2 inch SU HD8 carburettors and a modified cylinder head giving a claimed 250 bhp. The engine capacity was increased in 1958 to 3.8 litres by increasing the bore. Claimed output was now 220 bhp for the standard and 265 bhp for the S version.

Four-wheel disc brakes appeared for the first time although it was theoretically possible to order a car with drums. Either wire wheels or disc wheels could be specified. Suspension and chassis were very similar to that on the XK140. Steering was by rack and pinion and power steering was not offered. 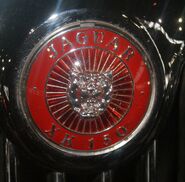 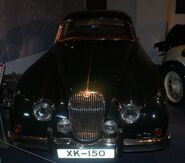 Jaguar XK150
Add a photo to this gallery

Retrieved from "https://classiccars.fandom.com/wiki/Jaguar_XK150?oldid=63182"
Community content is available under CC-BY-SA unless otherwise noted.