Start a Wiki
The Willys CJ-5 (after 1964 Jeep CJ-5) was influenced by the new corporate owner, Kaiser, and the Korean War M38A1 Jeep. It was intended to replace the CJ-3B, but that model continued in production. The CJ-5 repeated this pattern, continuing in production for three decades while three newer models appeared. "The CJ-5 has the distinct honor of being a vehicle that was hard to kill off... equaling the longest production run of note." A total of 603,303 CJ-5s were produced between 1954 and 1983.

The company was sold to American Motors (AMC) in 1970, and the GM engine was retired after the 1971 model year. (GM's Buick division repurchased the engine tooling in the early 1970s which served as the powerplant in several GM vehicles.) The "Trac-Lok" limited-slip differential replaced the "Powr-Lok" in 1971.

American Motors began using their own engines in 1972. Replacing the Hurricane was the one-barrel 232 cu in (3.8 L) (except in California). Optional was a one-barrel 258 cu in (4.2 L) (standard in California). Also in 1972, AMC's 304 cu in (5.0 L) V8 engine became available in the same tune as a base V8 muscle car. To accommodate the new engines the fenders and hood were stretched 5 inches (127 mm) starting in 1972 and the wheelbase was stretched 3 inches (76 mm). Other drive train changes took place then as well, including the front axle becoming a full-floating Dana 30.

Early Tuxedo Park models were trim lines, but the Tuxedo Park Mark IV was claimed as a separate model than the other CJ series (marked in 1965 as the "Universal"), with more differences than past models. The Tuxedo Park Mark IV was an attempt to crack the mass market; it was, according to Jeep, “a new idea in sports cars ... the sportiest, most FUNctional car on the automotive scene.” It added to the standard CJ chrome bumpers, hood latches, gas cap, mirror, and tail lamp trim. 81 and 101 inch wheelbases were available, with a variety of convertible top and seat colors, and front bucket seats in “pleated British calf grain vinyl.” Sales of this model, introduced in 1965, were low.

In Australia, a unique variant of the CJ5/CJ6 was produced in limited numbers. In 1965, when the CJ was given the all-new Buick V6, Jeep saw the need for something similar in Australia. As such, they began to fit Falcon 6-cylinder engines to them at their Rocklea factory in Queensland. The jeep was fitted with an engine, pedal box and clutch/brake system corresponding to the equivalent Falcon at the time; i.e. a 1965 CJ5 would be fitted with 1965 Falcon engine/clutch components. When the Falcon received a hydraulic clutch system, so too did the Jeep. Combat 6 jeeps were also fitted with Australian Borg Warner differentials, and Borg Warner brand gearboxes. Unfortunately there is very little documentation about these jeeps, and often the only way to conclusively identify them is by owner history. Web page describing Jeep's presence in Australia, including the "Combat 6" 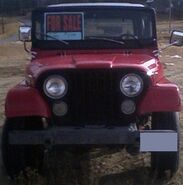 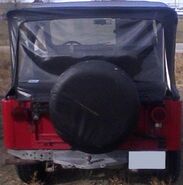 1973 Jeep CJ-5
Add a photo to this gallery
Retrieved from "https://classiccars.fandom.com/wiki/Jeep_CJ-5?oldid=37705"
Community content is available under CC-BY-SA unless otherwise noted.