The Jensen C-V8 is a sports car produced by Jensen Motors.

Launched in October 1962, it was the successor to the similarly styled 541 series of Jensen motorcars and shared their use of fibreglass as a body material (only the door skins were metal).

The C-V8 used big block Chrysler engines, at first the 361 and from 1964 the 383 in³ which produced 330 bhp (246 kW). A few were fitted with standard transmissions but most left the factory with the excellent Chrysler Torqueflite automatic. Since the majority of C-V8s were made for the British market, only 8 examples were made in left-hand drive (LHD) and such cars are prized today by European and American collectors.

As a result of the fibreglass bodywork and the fact that the large twin-tube frame was set in from the perimeter of the car, many examples of this model have survived the years in better shape than many contemporary vehicles and continue to provide a comfortable high performance driving experience.

The styling was done by the factory, and was ...controversial. It was decidedly unusual and the slant eyed look either repelled or attracted people with little middle ground. This perhaps contributed to the relatively small total production from 1962 to 1966 of 500 cars.

The car was upgraded to Mk II specification in 1963 with Selectaride dampers fitted to the rear. The 1965 Mk III had both pairs of front headlights made the same size and a dual circuit braking system.

The Jensen CV-8 Mk II was featured in the ITC television series The Baron made in 1965/66.

Two convertibles were made by the factory – a full cabriolet and a Sedanca that was only open above the driver and front passenger. A feature about the unique CV8 Sedanca, written by British motoring journalist Paul Walton was printed in the June edition of Ruoteclassiche (Italy's leading classic car magazine). 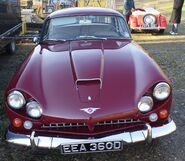 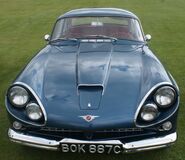 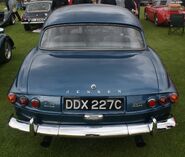 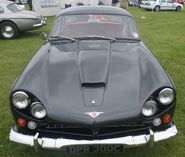 CV8
Add a photo to this gallery

Retrieved from "https://classiccars.fandom.com/wiki/Jensen_CV8?oldid=50863"
Community content is available under CC-BY-SA unless otherwise noted.