Start a Wiki
Lancia Appia was a car introduced in 1953 as a replacement for the Ardea and in production for 10 years. The Appia was the last in a long line of Lancia production cars dating back to the Lancia Lambda (introduced in 1922) to use the famous sliding pillar front suspension. All three series produced had a V4 engine of 1089 cc, which gave the car good performance.

In addition to the saloons, a number of special bodied Appias were produced, including a Coupe, by Pininfarina, a convertible by Vignale and an aluminium bodied GT by Zagato.

The Appia was renowned for its high quality and simple engineering refinement, which helped it gain a deserved reputation for reliability and longevity.

Often overlooked by classic car enthusiasts (and the press) in favour of its more prestigious stable mates the Aurelia and Flaminia, those who own and run these cars know that they are equally deserving of recognition and preservation.

Three series of Appia was built:

Approximately 98,000 Appias were built as Berlinas, 3,900 as commercial vehicles and 5,200 supplied to coachbuilders.

Vignale built a cabriolet version between 1957 and 1963. Between 1959 and 1961 the Berlina Lusso was also available with styling cues from the cabriolet.

Zagato built many coupé versions based on the Berlina between 1957 and 1962.

Zagato built around 750 cars on the Appia chassis.

The Appia has V4-engine with 10,2° valve angle and one cylinderhead for both cylinder blocks. 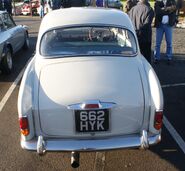 Lancia Appia Series III
Add a photo to this gallery
Retrieved from "https://classiccars.fandom.com/wiki/Lancia_Appia?oldid=68758"
Community content is available under CC-BY-SA unless otherwise noted.