The Lancia Delta is a small family car produced by Italian automaker Lancia from 1979 to 1994. It is revived for the 21st-Century, debuting at the 2008 Geneva Motor Show and the new Delta is expected to go on sale for the 2009 model year.

The first Delta was a five-door hatchback designed by Giorgetto Giugiaro and released in 1979. For a period of time, it was also sold in Sweden by Saab Automobile, badged as the Saab 600. Saab assisted with some areas of the cars' design and as a result the Delta was better suited for colder climates and less prone to rust than other Lancias. Key competitors were the Volkswagen Golf, Opel Astra/Kadett and Ford Escort. For a few years after its launch, the Delta was one of the most contemporarily styled cars of its class in Europe and was voted Car of the Year in 1980.

While the majority of Delta models were ordinary small family cars, the most famous model was the Delta HF Integrale, a four-wheel drive hot hatch with a powerful turbocharged petrol engine. A tweaked version of the HF dominated the World Rally Championship, scoring 46 WRC victories overall and winning the Constructors Championship a record six times in a row from 1987 to 1992.

The Lancia Delta S4, while sharing the same name and appearance, was a Group B race car designed specifically for rallying, and entirely different from the commercial Delta in terms of construction and performance.

In 1986 the rallying world suffered a tremendous blow in terms of development as FISA decided to scrap plans for a proposed Group S as well as cancelling Group B. It was ruled that Group B cars were too fast and, as a consequence, too dangerous. It is arguable that Lancia was one of the more far-sighted manufacturers at the time, as it was already developing the Delta HF 4X4 production car using experience gained from the development of the S4 rally car.

Superseding the Delta HF Turbo as the flagship of the Delta range — S4 excepted — the HF 4WD had a lot to live up to. The HF Turbo i.e. was no slouch and its handling was praiseworthy for a front-wheel drive car.

The Delta range was first introduced to the UK in 1980 and remained virtually unchanged until 1986, when small changes were made to the cars' body shape, the engines updated and the four-wheel drive model introduced.

One of the features of the Delta HF 4WD is the under-statement of the body styling. There is very little to distinguish the car from the earlier 'Turbo i.e.' apart from the four-headlight system, fog lamps mounted in the front spoiler, discreet 4WD badging on the rear hatch, small side skirts and two raised air intakes on the bonnet (hood). The later car is therefore virtually indistinguishable from the 1600 cc HF Turbo i.e.

With 165 bhp (123 kW) on tap, the best way of transferring it to the road is via four, rather than two-wheel drive. In the Delta HF 4X4, Lancia was not content to go for a simple system but rather opted for one with an in-built torque-splitting action to ensure that the available power was going to the wheels with the most traction at any given time, thus ensuring the most efficient use of the available power and torque.

Three differentials are at the heart of the system. Drive to the front wheels is linked through a free-floating differential; drive to the rear wheels is transmitted via a 56/44 front/rear torque-splitting Ferguson viscous-coupling-controlled epicyclic central differential.

The real innovation as far as production cars are concerned however, lies between the rear wheels.

The Torsen (torque sensing) rear differential is similar to that found on McLaren Formula 1 cars. The result of combining these differentials in this configuration is a four-wheel-drive system which responds automatically to available grip and road conditions, and which requires no manual input from the driver, delivering maximum traction at all times.

The Torsen differential is a true 'intelligent' differential in the way it distributes torque. It divides the torque between the wheels according to the available grip, and does so without ever locking fully: maximum lockup is 70%.

Standard differentials are either free-floating or self-locking. Free-floating systems are good at differentiating between wheel speeds on bends, but always supply the same amount of torque to both wheels. In this situation, however, there is a risk that the wheel with the lighter load (on an incline, for example) or less grip, will lose traction. To counteract this possibility, totally self-locking differentials ensure that both wheels rotate at the same speed but in doing this, prevent free differentiation in cornering, to the detriment of handling and stability.

The basic suspension layout of the Delta 4WD remains the same as in the rest of the two-wheel drive Delta range: MacPherson strut–type independent suspension with dual-rate dampers and helicoidal springs, with the struts and springs set slightly off-centre.

There are a few more subtle changes, though, with the suspension mounting points to the body shell, now better insulated by incorporating flexible rubber links to provide improved isolation. Progressive rebound bumpers have also been adopted, while the damper rates, front and rear toe-in and the relative angle between springs and dampers have all been altered. The steering retains the rack and pinion mechanism of the rest of the Delta range, but in this application it is power-assisted. Steering effort has been reduced further by fitting thrust bearings of the ball, rather than roller type. Additional steering sensitivity has also been obtained by adjusting the angle of incidence of the steering rack. 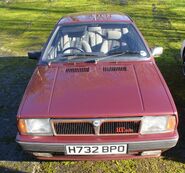 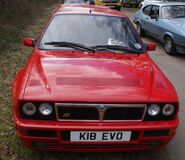 Lancia Delta HF Turbo
Add a photo to this gallery
Retrieved from "https://classiccars.fandom.com/wiki/Lancia_Delta?oldid=60822"
Community content is available under CC-BY-SA unless otherwise noted.