The Lotus Elan was a highly successful car from the 60's that had looks that would still look modern and fresh today!

The original Elan was introduced in 1962 as a roadster, although an optional hardtop was offered in 1963 and a coupé version in 1965. The two seat Lotus Elan replaced the elegant, but unreliable and expensive to produce Lotus Elite. It was the first Lotus road car to use the now famous steel backbone sub frame with a fibreglass body. At 1,500 lb (680 kg), the Elan embodied the Colin Chapman minimum weight design philosophy. Initial versions of the Elan were also available as a kit to be assembled by the customer. The Elan was technologically advanced with a twin-cam 1558 cc engine, 4-wheel disc brakes, and 4-wheel independent suspension. The Lotus-Ford Twin Cam engine was based on Ford's Pre-Cross-flow 4 cylinder 1500 cc engine, with a Lotus-inspired Cosworth alloy twin-cam head. This Lotus-Ford 4-cylinder engine would go on to be used in a number of Lotus production and racing models.

An Elan +2 was introduced in 1967 with a longer wheelbase and two more rear seats. The Elan +2 embodied the Lotus spirit: It was a fast and agile sport coupe, with very elegant lines. It combined the performance and reliability of the Elan "Coupe" with genuine 2+2 passenger comfort. Tested maximum power: 108-126 bhp (net) (depending on the model); top speed: 120 mph (190 km/h), 0-60 mph in 7.9 seconds, 0-100 mph 21.8 seconds. 5,200 Elans +2 were made: less than 1,200 of these cars remain in the roads today. Their relative rarity, beautiful lines, impressive performance and practicality are the main factors for the rising interest on these cars among collectors.

The Elan ceased production in 1973 and the Elan +2 in 1975. An estimated total of 17,000 original Elans and Elans +2 were built. Because of its successful design and technological sophistication, the Elan went on to become Lotus' first commercial success, reviving a company stretched thin by the more exotic and less commercially successful Elite, and enabling funding of the Lotus success in racing over the next ten years.

This generation of the two-seater Elan was famously driven by the character Emma Peel on the British television series The Avengers. In 2004, Sports Car International named the Elan number six on the list of Top Sports Cars of the 1960s. The original version of the car was designed by Ron Hickman, who also designed the first Lotus Europa as part of Lotus' GT40 project bid and made his fortune having designed the Black & Decker WorkMate.

The original Elan is commonly credited as being the design inspiration for the highly successful 1989 Mazda MX-5 (Mazda Miata in North America).

The Lotus M100 Elan, launched in August 1989, was a two-seater, convertible sports car designed by Lotus, with a reliable Japanese engine and manual transmission supplied by Isuzu, and built with the development and testing resources of General Motors. Around £35 million (about $55 million) was invested in its developmentmore than any other car in Lotus history. Its design, featuring a fibreglass composite body over a rigid steel backbone chassis, was true to Lotus founder Colin Chapman's original philosophy of achieving performance through low weight, and the name "Elan" connected the car with its 1960s ancestor, the original Lotus Elan.

In 1986 the purchase of Lotus by General Motors provided the financial backing to develop a new, small, affordable car in the same spirit as the original Elan (last built in December 1972). A development prototype, the M90 (later renamed the X100) had been built a few years earlier, using a fibreglass body designed by Oliver Winterbottom and a Toyota-supplied 1.6-litre engine and transmission. Lotus was hoping to sell the car through Toyota dealerships worldwide, badged as a Lotus Toyota, but the project never came to fruition and the prototype was shelved (although Lotus's collaboration with Toyota had some influence on the design of the Toyota MR2).

The idea of a small roadster powered by an outsourced engine remained, however, and in late 1986 Peter Stevens's design for the Type M100 was approved and work began by Lotus engineers to turn the clay styling buck into a car that could be built. This process was completed in just under three years, a remarkably short time from design to production car.

The M100 Elan was conceived as a mass-market car and in particular one that would appeal to US buyers. Consequently, Lotus put an enormous effort (for such a small firm) into testing the car; over a two-year period 19 crash cars and 42 development vehicles were built, logging nearly a million test miles in locations from Arizona to the Arctic. The Elan was driven at racing speeds for 24 hours around the track at Snetterton. Finally each new car was test-driven for around 30 miles (48 km) at Lotus's Hethel factory to check for any manufacturing defects before being shipped to dealers.

The choice of front-wheel drive is unusual for a sports car, but according to Lotus sales literature, "for a given vehicle weight, power and tyre size, a front wheel drive car was always faster over a given section of road. There were definite advantages in traction and controllability, and drawbacks such as torque steer, bump steer and steering kickback were not insurmountable." This was the only front-wheel-drive vehicle made by Lotus. Every model made since the M100 Elan, such as the Lotus Elise, has been rear-wheel drive.

The M100 Elan's cornering performance was undeniable (on release the Elan was described by Autocar magazine as "the quickest point to point car available"). Press reaction was not uniformly positive, as some reviewers found the handling too secure and predictable compared to a rear-wheel-drive car. However, the Elan's rigid chassis minimised roll through the corners and has led to its description as 'the finest front wheel drive [car bar none'.] Unlike the naturally aspirated version, the turbocharged SE received power steering as standard, as well as tyres with a higher ZR speed rating.

The M100 Elan used a 1,588 cc double overhead camshaft (DOHC) 16-valve engine, sourced from the Isuzu Gemini and extensively modified by Lotus (a third generation of this engine was later used in the Isuzu Impulse), which produced 162 horsepower (121 kW). 0–60 acceleration time was measured by Autocar and Motor magazine at 6.5 seconds, and a top speed of 137 mph (220 km/h) was recorded.

Significant differences in the Isuzu-Lotus engine from the original include a new exhaust system, re-routed intake plumbing for better thermodynamic efficiency, improved engine suspension, and major modifications to the engine control unit to improve torque and boost response. Almost all models featured an IHI turbocharger.

Two variants were available at launch, the 130 bhp (97 kW; 132 PS) Elan 1.6 (retailing at £17,850) and the 162 bhp (121 kW; 164 PS) Turbo SE (£19,850). Initial sales were disappointing, perhaps because its launch coincided with a major economic recession in the UK and USA, and perhaps also because it coincided with the cheaper Mazda MX-5 which was arguably similar in concept, though the MX-5 was quite intentionally nostalgic and old fashioned (apeing the original Elan), while the M100 was deliberately futuristic, modern and forward looking. The Elan was regarded as a good product in a bad market, but was also very expensive to make (the cost to design and produce the dashboard alone was more than the total cost of the Excel production line), and sales figures were too low to recoup its huge development costs.

Altogether 3,855 Elans were built between November 1989 and July 1992, including 129 normally aspirated (non-turbo) cars. 559 of them were sold in the US, featuring a 'stage 2 body' which had a different rear boot spoiler arrangement together with a lengthened nose to accommodate a USA-compliant crash structure and airbag, and 16-inch wheels (optional in most markets, standard in the U.S.) instead of 15-inch as on the UK model. 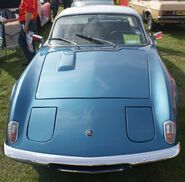 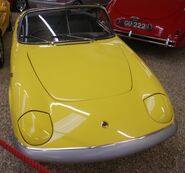 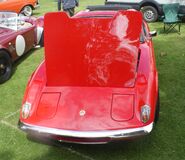 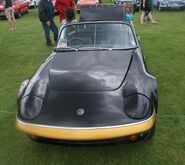 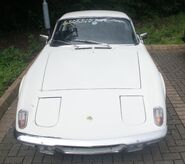 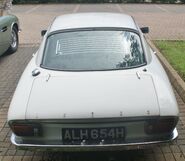 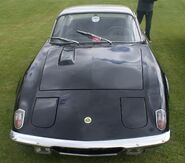 Lotus Elan +2
Add a photo to this gallery
Retrieved from "https://classiccars.fandom.com/wiki/Lotus_Elan?oldid=69093"
Community content is available under CC-BY-SA unless otherwise noted.