Start a Wiki
The MG Midget is a small two-seater sports car produced by the MG division of the British Motor Corporation from 1961 to 1979. It revived a famous name used on earlier models such as the MG M-type, MG D-type, MG J-type and MG T-type.

The first version was essentially a slightly more expensive badge-engineered version of the Austin-Healey Sprite MKII and retained the quarter-elliptic sprung rear axle from the original Sprite. The engine was a 948 cc A-Series with twin SU carburettors producing 46 hp (34 kW) at 5500 rpm and 53 lbf·ft (72 Nm) at 3000 rpm. Brakes were 7 in (178 mm) drums all round. A hard top, heater, radio and luggage rack were available as factory fitted extras.

The doors had no external handles or locks and the windows were sliding Perspex side-screens. A heater was an optional extra.

Externally the main changes were to the doors, which gained wind-up windows, swivelling quarter lights, external handles and separate locks. The windscreen also gained a (slight) curvature and was retained in a more substantial frame. The hood (US – top), though modified, continued to have a removable frame that had to be erected before the cover was put on. The rear springs were replaced by more conventional semi-elliptic types which gave a better ride. The engine block was strengthened and larger main bearings were fitted, increasing the power to 59 hp (44 kW) at 5750 rpm and torque to 65 lbf·ft (88 Nm) at 3500 rpm.

The engine now grew to 1275 cc using the development seen on the Mini-Cooper 'S'. Enthusiasts were disappointed that this was a de-tuned version of the 75 bhp @ 5800 rpm Cooper 'S' engine, giving only 65 hp (48 kW) at 6000 rpm and 72 lbf·ft (98 Nm) at 3000 rpm. A reduced compression ratio of 8.8:1 was used instead of the 9.75:1 employed on the Cooper S engine. The Midget used the 12G940 cylinder head casting that was common to other BMC 1300 cars, whereas the Cooper 'S' had a special head with extra-large valves: however, these valves caused many 'S' heads to fail through cracking between the valve seats. The detuned engine was used for reasons of model range placement - with the Cooper 'S' spec engine the Midget would have been faster than the more expensive MGB. The hydraulic system gained a separate master cylinder for the clutch. The hood was now permanently attached to the car, with an improved mechanism making it much easier to use. There were minor facelift changes to the body in 1969, with the sills painted black and a revised recessed black grille. Rubery Owen "Rostyle" wheels were standardised but wire-spoked ones remained an option. US-spec cars received several safety additions: a padded fascia (dashboard) with smaller main gauges; collapsible steering column, scissor-type hood hinges, a third windshield wiper, additional side marker lights, and anti-burst door latches. The rear axle gear ratio was increased in 1968 to 3.9:1, giving 16.5 mph for every 1000 RPM. The increased gear ratio gave the 1275 model slightly better fuel economy than the 1098 model.

The square-shaped rear wheel arches became rounded in January 1972. Also in this year, a Triumph steering rack was fitted, giving a gearing that was somewhat lower than earlier Midgets. A second exhaust silencer was also added in 1972. Alternators were fitted instead of dynamos from 1973 onwards. For 1974 model year, rubber bumper extensions were added to the chrome bumpers to meet the first US bumper impact regulations.

Many consider the round-arch Midgets with chrome bumpers produced for model years 1972 and 1973 to be the most desirable. These round-arch cars started leaving the Abingdon factory in late 1971.

To meet US federal regulations, large black plastic bumpers (usually called rubber bumpers, despite not actually being rubber) were added to the front and rear and the ride height was increased. The increased ride height impacted handling, and an anti-roll bar was added to help with higher center of gravity. The A-Series engine was replaced by the 1493 cc unit from the Triumph Spitfire and a modified Morris Marina gearbox with synchromesh on all four gears. The increased displacement of the new engine was better able to cope with the increasing emission regulations. Although the horsepower ratings were similar (65 bhp - home market) the 1493 CC engine produced more torque. The increased output combined with taller gear ratios resulted in faster acceleration, (12 seconds 0-60 compared to 13 for the 1275cc version) and top speed of just over 100 mph. In the US market British Leyland struggled to keep engine power at acceptable levels, as the engines were loaded with air pumps, EGR valves and catalytic converters to keep up with new US and California exhaust emission control regulations. The home market's dual SU HS4 carbs were swapped for a single Zenith-Stromberg 150 CD4 unit, and the power fell to 50 bhp at 5000 RPM and 67 lb-ft of torque at 2500 RPM. The round rear-wheel arches were now square again, to increase the body strength. The last car was made on December 7, 1979, after 73,899 of the last version had been made. The last 500 cars were painted black. There was no Austin-Healey Sprite equivalent. A limited number of MG Midgets were titled in 1980, and appear as 1980 models.

ADO34 was the name of a project active between 1960 and 1964 that aimed to develop a Mini-based roadster to replace the MG Midget and Austin-Healey Sprite. It was not proceeded with. 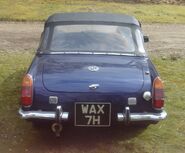 MG Midget
Add a photo to this gallery

Retrieved from "https://classiccars.fandom.com/wiki/MG_Midget?oldid=63232"
Community content is available under CC-BY-SA unless otherwise noted.