The Messerschmitt KR200, or Kabinenroller (Cabin Scooter), was a three-wheeled bubble car designed by the aircraft engineer Fritz Fend and produced in the factory of the German aircraft manufacturer Messerschmitt from 1955 to 1964.

Messerschmitt, temporarily not allowed to manufacture aircraft, had turned its resources to producing other commodities. In 1952, Fend approached Messerschmitt with the idea of manufacturing small motor vehicles. These were based on his Fend Flitzer invalid carriage.

The first of Fend's vehicles to enter production at Messerschmitt's Regensburg factory was the KR175. The title Kabinenroller means "scooter with cabin". While the Messerschmitt name and insignia were used on the car, a separate company, incorporated as Regensburger Stahl- und Metallbau GmbH, was created to manufacture and market the vehicle.

The KR200 replaced the KR175 in 1955. While using the same basic frame as the KR175 with changes to the bodywork (notably including wheel cutouts in the front fenders) and an improved canopy design, the KR200 was otherwise an almost total redesign. The rear suspension and engine mounting were reworked, and hydraulic shock absorbers were installed at all three wheels. Tire sizes were enlarged to 4.00x8.

In 1956, Messerschmitt was allowed to manufacture aircraft again and lost interest in Fend's microcars. Messerschmitt sold the Regenburg works to Fend, who formed Fahrzeug- und Maschinenbau GmbH, Regensburg (FMR) to continue production of the KR200 and his other vehicles.

In 1957, the KR200 Kabrio model was released, featuring a cloth convertible top and fixed side window frames. This was followed by the KR201 Roadster without window frames, using a folding cloth top, a windscreen, and removable side curtains. A Sport Roadster was later offered with no top and with the canopy fixed into place so that the driver would have to climb in and out at the top of the car.

Production of the KR200 was heavily reduced in 1962 and ceased in 1964 as sales had been dropping for a few years. The demand for basic economy transport in Germany had diminished as the German economy boomed. A similar situation developed in other parts of Europe such as in the manufacturer's biggest export destination, the United Kingdom, where sales were particularly affected by the increasing popularity of the Mini.

In 1955, in order to prove the KR200's durability, Messerschmitt prepared a KR200 to break the 24-hour speed record for three-wheeled vehicles under 250 cc (15.3 cu in). The record car had a special single-seat low-drag body and a highly modified engine, but the suspension, steering, and braking components were stock. Throttle, brake, and clutch cables were duplicated. The record car was run at the Hockenheimring for 24 hours and broke 22 international speed records in its class, including the 24-hour speed record, which it set at 103 km/h (64 mph)

The KR200 incorporated several features unique to the KR line and its four-wheeled derivative, the FMR Tg500. Externally, the narrow body, the transparent acrylic bubble canopy and low stance were among the more obvious features.

The tandem seating also centralized the mass of the car along the longitudinal axis which, combined with the low center of gravity, low weight, and wheel placement at the vehicle's extremes, gave the KR200 good handling characteristics A more minor advantage of tandem seating was that it made an export version to countries that drive on the left unnecessary. An "Export" model was built, but this denoted a more luxurious trim level.

Entry to most KR models except the KR201 Sport Roadster and a corresponding Tg500 version was through a canopy door hinged on the right side of the vehicle. The door included all the windows (windshield, window frames on all but the Roadster models, folding top on Roadster and Kabrio models, and acrylic bubble on other versions) and the frame in which it was set, extending from the right side of the monocoque tub to the left. On Sport Roadster models, the canopy was fixed and there was neither a top nor any windows at all, only a tonneau cover. The bubble top on the KR200 was simplified over that of the KR175 by the use of a larger curved glass windshield that formed A-pillars with the side window frames. This allowed the bubble to be simpler and more compact than the KR175 bubble, and it was consequently easier and less expensive to produce. The windshield wiper, manual on the KR175, was electric on the KR200.

The KR200 ran on a 191 cc (11.7 cu in) Fichtel & Sachs air-cooled single cylinder two-stroke engine positioned in front of the rear wheel, just behind the passenger's seat. The engine had two sets of contact breaker points and, to reverse, the engine was stopped and then restarted, going backwards. This was effected by pushing the key further in the ignition switch than normal, whether intentionally or not. One result of this was that the KR200's sequential, positive-stop transmission provided the car with the same four gear ratios available in reverse as in forward movement.

Apart from the dual-mode ignition, the KR200 had a steering bar reminiscent of that of an aircraft. Operated by pushing rather than by turning, the steering bar was connected directly to the track rods of the front wheels, providing an extremely direct response best suited to small, measured inputs. The gearshift lever had a secondary lever on it which, when actuated, would put the car in neutral regardless of what gear it had been in before, although the transmission would have to be shifted back to first before the car would be able to move from a standstill.

Unlike the KR175, the KR200 had a full set of pedals: clutch, brake, and accelerator. The brake pedal still operated mechanical brakes using cables.

There are car clubs in Europe, the US, and elsewhere that still value these cars, usually for their quirky character rather than their actual monetary value. Nonetheless, some collectors will pay over 20,000 euros for a well-maintained "Schmitt".

Aftermarket reproduction parts are made for the KR200, including reproduction bubble tops made from car-safe polymethyl methacrylate.

Granada Television's Fred Talbot is seen driving a Messerschmitt KR200 on the Granada Reports feature Where's Fred? in which the viewer has to identify which North West England location the presenter is in that week. 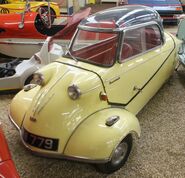 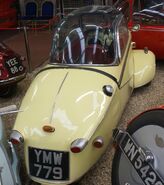 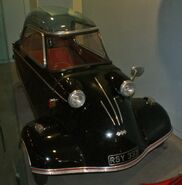 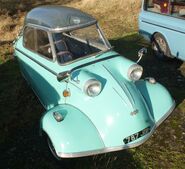 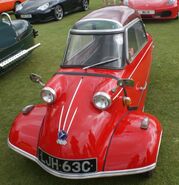 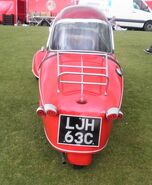 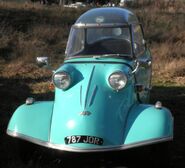 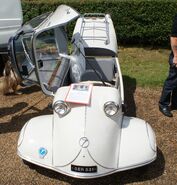 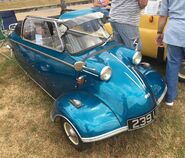 Messerschmitt KR200
Add a photo to this gallery
Retrieved from "https://classiccars.fandom.com/wiki/Messerschmitt_KR200?oldid=71171"
Community content is available under CC-BY-SA unless otherwise noted.