The Morgan Plus 8 is a sports car built by British car makers Morgan between 1968 and 2004. Its instant and enduring popularity has been credited with saving the company and keeping the company famous during the 36 years of its manufacture. Among Morgan enthusiasts, it is deeply associated with Peter Morgan, the owner-chairman behind its design.

To mark the 35th year of production of its Plus 8, MMC released a commemorative 'Anniversary Edition'.

All Plus 8s engines were based on the Buick 215 which had been bought by Rover. Morgan was the first of a succession of sports car makers - including the likes of TVR and Marcos - to use the engine, which Rover had only just made available in the P5B saloon.

In 1996, a 4.6 L version found its way into the car as an option, still using the 14CUX system. From 2000, all Morgan Plus 8s were fueled by the GEMS system used on the Land Rover Discovery II. 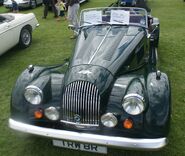 Morgan +8
Add a photo to this gallery
Retrieved from "https://classiccars.fandom.com/wiki/Morgan_%2B8?oldid=63256"
Community content is available under CC-BY-SA unless otherwise noted.