The Morris Ital was a medium-sized saloon car built by British Leyland (BL) from 1980 until 1984.

The Ital was first launched on 1 July 1980. It took its name from Giorgetto Giugiaro's ItalDesign studio, who had been employed by BL to manage the re-engineering of Morris Marina, a car which had been produced by the company since 1971. Although the redesigned car was named Ital after the design studio, it was actually Harris Mann who was responsible for the car's new look. BL's advertising, however, emphasised the car's connection with the Italian styling house Italdesign, who had in fact merely produced the design. It was originally planned to brand the car as the Morris Marina Ital, but the Marina name was dropped on the orders of Michael Edwardes and only the Ital name was used.

The Ital had revised exterior styling, but retained the Marina's 1.3- and 1.7-litre petrol engines and rear wheel drive chassis. The dashboard and interior of the Marina were also carried over largely unaltered. The Marina's coupé variant was not produced in Ital form, but the four-door saloon, five-door estate and pick-up and van versions were carried over from the Marina range. From October 1980 an automatic version of the Ital was available with the 2.0-litre O-Series power unit, as the range-topping 2.0HLS. Only about 1000 2.0HLS models were sold so due to this and their short production run, the 2.0HLS is now the rarest Ital model. In November 1981 all HL and HLS models were fitted with upgraded interior trim and in September 1982 the final revised Ital range was introduced, the L and 2.0 litre models were dropped and the HL and HLS were replaced by the SL and SLX models. Front suspension was changed to telescopic front dampers across the range and parabolic rear springs were also fitted, together with additional soundproofing and improved trim. The range now consisted of the 1.3 SL and SLX saloon 1.3 SL estate 1.7 SLX saloon 1.7 SL and SL estate. These final models ran until the end of Morris production in 1984.

Although most Itals were manufactured in the UK, there were also Portuguese-assembled Itals (badged as Marina 1.5 D) which were all equipped with the ancient 1.5-litre B-Series diesel engine, producing 37 hp. The British Leyland factory in Setúbal (IMA) then switched to producing the Mini Moke.

The Ital sold reasonably well in Britain during the early 1980s, as it offered a competitive asking price and low running costs. The Ital's technology differed from many of its contemporaries, such as the Opel Ascona/Vauxhall Cavalier, as well as the Talbot Alpine, which were different in that they had front wheel drive. After the introduction of the Opel Ascona C / Vauxhall Cavalier Mark II in August 1981, the Ital and Ford's Cortina (and later Sierra) were the only mass-volume cars in the sector to maintain rear-wheel drive.

The end of Morris

The Ital was the last production car to wear the Morris badge (although there was a Morris-badged van version of the Metro which was produced until 1984). Production of the Ital was swapped from Cowley to Longbridge in September 1982 to allow the Cowley plant to be upgraded for production of the forthcoming Austin Montego and Austin Maestro. At this time, the Ital received an upgrade with different front and rear suspension (parabolic rear springs and telescopic front dampers) and models were redesignated SL and SLX. The saloon was dropped from the line in February 1984 with the van and estate completing outgoing contracts for another six months, until they too were axed. From this point, the Morris marque was kept alive solely by the Metro van, and by the end of the decade the Morris marque had been completely discontinued along with the Austin marque, as the Rover brand monopolised the range of hatchback and saloons.

The Ital's successor was the Austin Montego, launched in April 1984 as a four-door saloon, with a five-door estate arriving in January 1985.

After UK production ceased, the Ital's production tooling was sold to the Chengdu Auto Works, a company belonging to the First Auto Works Group in Sichuan province, China. In 1998, the Ital estate (utilising a locally-made chassis) reappeared there, under the name Huandu CAC6430. Van and pick-up variants were also produced. Chengdu Auto Works is thought to have closed down in May 1999.

Already outdated by the time it was launched, and continually saddled with build quality problems, the Ital soon gained a very bad reputation. In July 2008, it ended up second in a poll of "the worst British car ever" conducted by The Sun, ending narrowly behind the Austin Allegro. The Ital was said to have similar rust problems to its predecessor, the Morris Marina, and because of this surviving Itals are rare today, although the Morris Marina Owners Club and Morris Ital Register is making sure the few remaining examples survive. As of 2019, just 37 Itals were taxed and still enjoyed active service on UK roads. 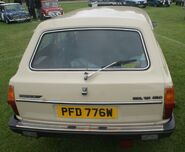 Morris Ital Estate
Add a photo to this gallery
Retrieved from "https://classiccars.fandom.com/wiki/Morris_Ital?oldid=70742"
Community content is available under CC-BY-SA unless otherwise noted.