Start a Wiki
The Opel Kadett is a small family car produced by the German automobile manufacturer Opel between 1937 and 1940, and then again from 1962 until 1991 (Cabrio 1993), when it was replaced by the Opel Astra.

The first Opel car to carry the Kadett name was presented to the public in December 1936 by Opel's Commercial-Technical director, Heinrich Nordhoff, who would in later decades become known for his leadership role in building up the Volkswagen company.

The new Kadett followed the innovative Opel Olympia in adopting a chassis-less monocoque construction, suggesting that like the Vauxhall 10 introduced in 1937 by Opel's English sister-company, the Opel Kadett was designed for high volume low cost production. Competitive pricing led to commercial success, and Kadetts continued to be produced during the early months of the war: by the time production was interrupted in 1940 following intensification of hostilities, 107,608 of these Opel Kadetts had come off the assembly line at Opel's Rüsselsheim plant, which had been the first major car plant in Germany to apply the assembly-line production techniques pioneered by Henry Ford.

After the war, Opel production facilities from Brandenburg an der Havel (trucks) were crated up and transported to the Soviet Union as part of a larger reparations package agreed upon by the victorious powers. From 1948 the prewar Kadett was manufactured as the Moskvitch 400/420: it continued to be produced on the edge of Moscow as a Moskvitch until 1956.

The Kadett was re-introduced in October 1962, 22 years after the original model was discontinued.

In 1957 Opel Product Director Karl Stief was mandated by General Motors headquarters in Detroit to develop "the perfect Anti-Volkswagen" ("einen perfekten Anti-VW"). The development team was headed up by Stief, supported by Hans Mersheimer (car-body) and Werner K. Strobel (engine and running gear), under conditions of such secrecy that even now very little is known of the development history of the 1962 Kadett. 649,512 of cars had been built at the company's new Bochum factory by the time it was replaced in July 1965.

The Kadett clearly featured a much more modern design than the Volkswagen Beetle which then dominated the market for small family cars in Germany and various surrounding countries. The Kadett offered more passenger space, massively more luggage space and a much less encumbered view out. Its water cooled engine enabled it to provide a far more effective heater. Even fuel consumption was under most conditions superior to that of the Volkswagen, and many commentators much preferred the Opel's handling and its light and effective brakes to those of the market leader.

However, by the mid-1970s the Kadett's greatest relative weakness was already painfully apparent, as the cars disappeared rapidly from German roads while the Beetles endured. The Kadett's bodywork was not well protected from corrosion.

On the British motoring show Top Gear, Richard Hammond drove a 1963 Kadett A through the middle of Botswana during a 2007 challenge. During the challenge, Richard Hammond successfully drove the Opel Kadett across the Makgadikgadi Salt Pan, making the Kadett A one of the first ever cars to cross the whole pan. He loved the car so much that he named it Oliver and later had the car shipped to the United Kingdom and restored, and it remains in his possession. It appeared on Richard Hammond's Blast Lab with the personalised number plate 'OLIV3R'.

The Kadett B came in 1966 and ended in 1973, with two and four door saloons (the latter in notchback and, from 1967, also in fastback form), a three-door estate, and two coupés (regular and fastback, or Coupé F). There was a sporting Opel Kadett Rallye, with a 1.9 L engine. Additionally, the two-seat Opel GT was heavily based on Kadett B components, its body made by a French contractor, Brissonneau & Lotz. Generally, the Kadett B was significantly larger than the Kadett A.

1966 was the year that Opel opened their new plant at Bochum, devoted exclusively to Kadett production. Between 1965 and 1973 Opel produced 2,691,300 Kadett Bs which makes this model one of the most successful Opels to date in terms of sales volume. The Kadett benefitted on the domestic market from a progressive slowing of demand for the old Volkswagen Beetle, while the Ford Escort and Volkswagen Golf which would compete for sales more effectively against the Kadett C both got off to a relatively slow start respectively in 1968 and 1974.

A "luxury" derivative of the Kadett B was sold as the Opel Olympia A.

The Kadett B was sold in the United States through Buick dealers from 1967 until 1972 simply as the Opel. U.S. models were later granted the front end and trim of the new Opel Olympia, introduced in 1966 as an upmarket version of the Kadett. The car took part in the Trans-Am Series during its commercial life. Kadett A and B were technically simple cars whose task was to compete with the market leader, the Volkswagen Beetle.

This lack of sophistication caused the US car magazine Car and Driver to publish a highly critical test of the Kadett in 1968, describing it as the "worst car in the world" and featuring photos of the car in a junkyard. Reportedly, GM withdrew ads from that magazine for several months as a consequence.

The Kadett C appeared in 1973 and was Opel's version of General Motors' "T-Car". The T-Car was also built in Japan by Isuzu and sold as the Isuzu Gemini and in Australia where it was marketed as the Holden Gemini. In South Korea, Saehan Motor then Daewoo Motor built a version of the Gemini originally known as the Saehan Gemini, later becoming the Daewoo Maepsy and Maepsy-Na after a final facelift.

The Kadett C formed the basis of the British Vauxhall Chevette, which had a restyled front end and launched with a hatchback body, in addition to using a 1256 cc OHV (over-head valve) Vauxhall engine rather than the 1196 cc OHV Opel engine. The Chevette made the Kadett C notable by allowing it to become Opel's first hatchback — a version named Kadett City appeared in August 1975, based on the Chevette's hatchback body. The Kadett's coupé body style was never manufactured as a Chevette however. Although Kadett C production ended in 1979, the Chevette was produced until January 1984. Unusually for Vauxhall models, the Chevette was imported to Germany starting in 1979 to satisfy the need for a cheaper car than the Kadett D, and was quite a success for a year or two before being replaced by the Corsa A. This import version, however was never officially badged as an Opel or a Vauxhall - being named simply as 'Chevette'.

The Kadett C today is a cult car in Germany, especially in fastback (coupé) form. The most sought after versions of the Kadett C Coupé are the Rallye and GT/E models. These models were built first with the Bosch fuel injected 1897 cc CIH (Cam In Head) Opel engine, and followed by the updated 1998 cc OHC engine. Conversions using the newer GM Family II engine are common.

Included in the range from 1976 was very rare version, the Aero-Kadett, an open-top Kadett with targa roll bar, detachable roof insert and a separate convertible top aft of the roll bar (like the contemporary Lancia Beta Spider). This car was built in very limited numbers by Karosserie Baur in Stuttgart. One clue concerning its rarity is the manufacturer's recommended retail price of DM 15,500 at a time when Volkswagen's trusted (if slower and heavier) 1303 Cabriolet was offered for DM 12,735.

The Kadett C reached the United States as the Buick–Opel. In reality, however, this was an Isuzu Gemini; an updated version of this car was marketed in the USA as the Isuzu I-Mark in the early 1980s.

In Brazil, the Kadett C was released six months before its European release, as the Chevrolet Chevette. It was available with a choice of three petrol engines, in 1.4 L, 1.6 L, and 1.0 L displacements (the latter available only for the 1992/3 model year); 1.4 L and 1.6 L versions were also available running on ethanol.

This Chevette went through several redesigns — first front and rear panels similar to the Opel version, then a look similar to the British Vauxhall Chevette, and finally a design reminiscent of the updated USA Chevrolet Chevette version. It was available in several different bodies: hatchback (1979–87), estate (called Chevrolet Marajó, 1980–89), pickup (Chevy 500, 1984–95) and saloon (1973–93). The Chevette sold over 1.6 million units in Brazil, being replaced by the Chevrolet Corsa.

The Kadett D was introduced in November 1979, going on sale in the UK some five months before the British version, the Vauxhall Astra Mark 1, was launched in April 1980. All models were designed as three- or five-door hatchbacks and estates or station wagons. There were also two- and four-door sedans, which used the same bodyshells as the hatchbacks, but these were soon dropped. Also dropped, in comparison to the C Modell was the Coupé.

Technologically, the Kadett D was a major departure, as it was Opel and Vauxhall's first front wheel drive car. It also introduced the Family II engine design with an single overhead camshaft, aluminium alloy cylinder head, hydraulic valve lifters, with capacities of 1300 and 1600 cc, and had a unique transaxle design which allowed the clutch to be replaced without removing the transmission unit.

Later, an 1800 cc version was introduced for the Kadett/Astra GTE model. This range of engines was also used for later models of the Corsa/Nova, and the mid-sized Cavalier/Ascona. The Kadett D was also equipped with a 1600 cc diesel engine that was possible to drive as cheap as 5.0 L/100 km, and a carry-over 1196cc OHV engine. It was also produced as IDA Kadett in Kikinda, Yugoslavia.

In Ukraine these are still common, 31 years later, their reliability being a factor. The most common versions are 1.3 and 1.6 S models.

The Kadett E (Vauxhall Astra Mark 2 in the UK) was introduced in 1984, and was voted 1985 European Car of the Year, largely due to its advanced aerodynamic body styling. The 1984 model was also developed into a more conventional three-box design with a boot (trunk), badged as the Vauxhall Belmont in the UK and the Opel Monza in South Africa, launched in January 1986. This was awarded 1985 Semperit Irish Car of the Year in Ireland. As usual, there was a station wagon called the "Caravan" available, with either three or five doors.

The Kadett E was voted European Car of the Year for 1985.

A convertible version was also available, for the first time in 1987, built by Bertone of Torino/Italy, bringing it to line with key competitors such as the Ford Escort and Volkswagen Golf which were available as cabrios before. For the 1988 model, capacities were raised to 1400, 1800 and a new 2000 cc engine, again used on the GSi and Vauxhall Astra GTE. In 1988, a 16-valve twin-cam version was developed for a high performance GSi/GTE model, yielding 156 hp (115 kW) in manufactured form.

The Kadett E has been seen as a grey import in the UK, but it is not as popular as the Vauxhall Astra Mark 2. It was never officially sold in Britain, and by 1989 General Motors was only marketing the Vauxhall brand in the UK. 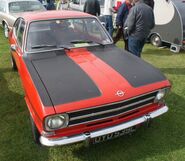 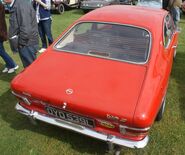 Opel Quattro
Add a photo to this gallery
Retrieved from "https://classiccars.fandom.com/wiki/Opel_Kadett?oldid=54547"
Community content is available under CC-BY-SA unless otherwise noted.