Start a Wiki
The Panther Lima was a retro-styled roadster of the 1970s. It used Vauxhall Viva and Magnum mechanicals, including that car's 2.3 L (2279 cc) engine. A later Mark II model used a purpose-built chassis. The body was built of fibreglass in a roadster style reminiscent of an Allard or Morgan. The Lima was produced in volume, with hundreds constructed. It was replaced by the Panther Kallista for the 1980s. The Turbo Lima was fitted with 14-inch alloy wheels, and had a TURBO graphic on the bonnet. 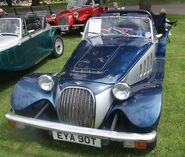 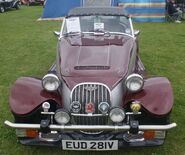 Panther Lima
Add a photo to this gallery

Retrieved from "https://classiccars.fandom.com/wiki/Panther_Lima?oldid=69025"
Community content is available under CC-BY-SA unless otherwise noted.